THE HISTORY OF SKY LANTERNS

Sky Lanterns originated in China an incredible 2000 years ago and although the delicate floating lights are now associated with calm and tranquillity that has not always been the case!

It is widely accepted that Sky Lanterns were first used in ancient China during the 3rd century BC. Myth says that military strategist Zhuge Liang, also known as Kongming, found himself surrounded by troops and trapped by Sima Yi in Pingyang. Thinking on his feet, Kongming lit a candle under a rice paper bag and using bamboo attached both the candle and a note which asked for help from nearby friendly forces. This early type of hot air balloon, used for military signalling, became known as a Kongming Lantern. Hot air, which is lighter than cold air, caused the Kongming Lantern to gracefully rise and luckily for Zhuge Liang his note was found and ultimately won him his freedom.

With the fantastic success of this first sky lantern, the device became widely used during conflict and were lit to signal the whereabouts of enemies, whilst differently coloured lanterns were seen as a signal for help. The greatest use of these lanterns however was the ability to transport messages and, dependent on wind direction, many transcripts were carried back and forth, often warning of impending danger.

Interestingly, it is thought that many reported UFO sightings are actually encounters of sky lanterns and as they can vary hugely in size, colour and even shape they can often present a very interesting, and seldom-seen, sight.

It is also worth noting that these early lanterns actually led to the creation of full-sized hot air balloons. Initially these larger balloons were still used as tactical devices for facilitating communication however in 1786 an inventor named Bartolomeu de Gusmão was able to raise himself with the use of an unmanned balloon.

In the 1780s the first manned hot air balloons were used and, like the sky lanterns before them, they became used during conflict. The first military use of a hot-air balloon happened in 1794 during the battle of Fleurus, when the French used the balloon l'Entreprenant for observation.

The sky lantern has changed very little in appearance however over the years oiled rice paper has been changed for flame retardant thin paper shells whilst, outside of Asia, a metal wire construction will hold the fuel source rather than more traditional bamboo. 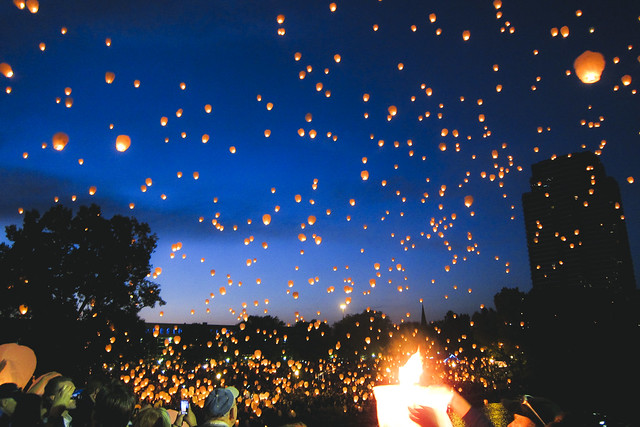 Today, sky lanterns are used in their thousands during lantern festivals and for many other special occasions. Often still used to carry messages, many in Taiwan attach prayers. In Thailand, it is not uncommon to attach a list of worrying or troubling thoughts and it is believed that as the lantern drifts away so will these problems. Millions believe that sky lanterns can bring good luck and during Chinese New Year thousands fill the sky whilst New Year's wishes are made.

2000 years after their creation sky lanterns are now more popular than ever and, given their majestic and tranquil beauty, we are not at all surprised! You can view our full range of Chinese lanterns here.

WHAT: THUNDER OVER LOUISVILLE 2023WHY: FIREWORKS AND AIRSHOW EVENTWHEN: SATURDAY 22nd APRIL 2023WHERE: LOUISVILLE, KE...
Read More
Filed in: Chinese Sky Lanterns, HISTORY, SKY LANTERNS
Share:
Find us on Facebook Find us on Twitter Find us on Pinterest Find us on Instagram Find us on Tumblr Find us on Vimeo Find us on Youtube Find us on LinkedIn Find us on Flickr
Previous article SOUTHEND’S FIREWORK DISPLAY IS TO MAKE A COMEBACK THIS YEAR!