THE EPIC BUYING TRIP TO CHINA

Jimmy and Paul are over the other side of the World on a buying trip in the heart of the home of fireworks; China, and as the Chinese New Year fast approaches, time is short to get around all the factories on their list before the mass migration home for the Spring Festival begins.

Here in the western world, we celebrate Christmas followed closely by the New Year and I do not know of many who have the whole of the holiday off but over in China, more than 90% will return to their homes from across the globe for this 15-day holiday to ensure that they get to share time with their families and loved ones.

Fireworks are incredibly important to the people of China and they have been making them for centuries. The town of Liuyang is in the Hunan Province which is acknowledged as the capital of fireworks. This region is responsible for 60% of the $60 million industry from the thousand or so factories which cover the area. When you consider that the whole of the UK comprises only 209,000 km2 and Hunan is 210,000 you could literally fit our whole country in their province!

Of the thousands of factories in the area, Jimmy and Paul have pretty much been to most but there are some which specialise in certain areas like fountains, roman candles and cakes and rockets are often made by separate companies.

Over the years with the implementation of numerous rules and regulations regarding the transport of explosives and the safeguarding of the staff of firework factories has resulted in a great many of them working exclusively for the domestic market like the massive Spring festival which accounts for 40% of the gross sales of fireworks.

In the images, you can see first of all the big Fountains in production – these are one of the biggest sellers of our range as the big beautiful 1kg bad boys last round 90 seconds and offer a great ground display and at the other end of the spectrum, there are the little teensy-weensy fountains, like the ones in the majority of multi-packs or selection boxes but they are absolutely essential for garden displays.

When it comes to cakes or barrages (the same thing … some say that if they have different effects they have other names but it is all horses for courses) we have a couple of preferred suppliers who specialise in effects for roman candles. Which outlet we use depends on the type/weight/effects we need. On the other hand, ALL our rockets come from one supplier which offers us the best quality at the best price and moreover that we can trust that they will send what we have seen and not something random. 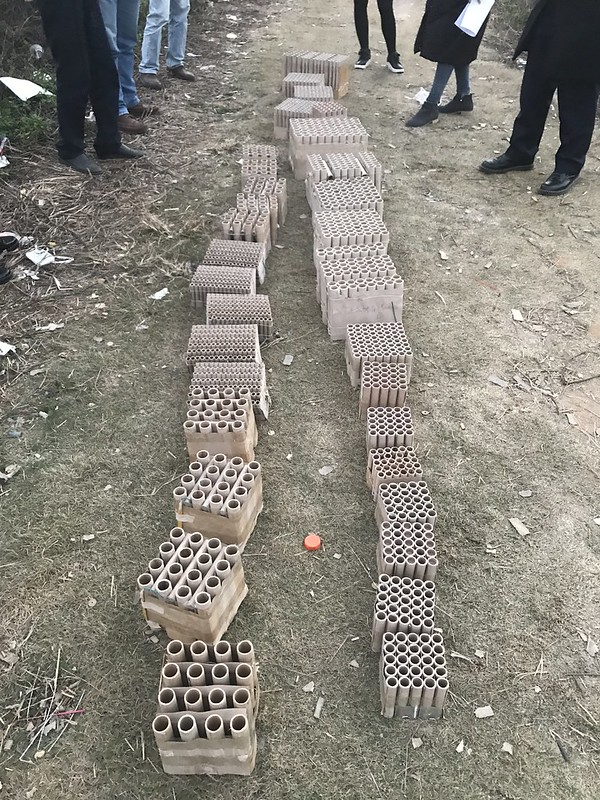 Check out the casements ready for creating that special fanned barrage and the roman candle shot tubes. Cakes/barrages are created by bundling together roman candle tubes which individually fire off effects but when carefully fused in a specific order, become a cake fit for a professional show, without the price tag.

We do try to bring something new in every year and this one is under consideration; Let us know what you think:

WHAT: Flamborough Fire FestivalWHY: New Year CelebrationsWHERE: The Festival Arena is situated at Mereside, Flamborou...
Read More
Filed in: 2018, BUYING TRIP TO CHINA, china, China Trip, china trip 2018, Epic Fireworks, liuyang, New Fireworks
Share:
Find us on Facebook Find us on Twitter Find us on Pinterest Find us on Instagram Find us on Tumblr Find us on Vimeo Find us on Youtube Find us on LinkedIn Find us on Flickr
Previous article FIREWORKS CHAMPIONS AT NEWBY HALL