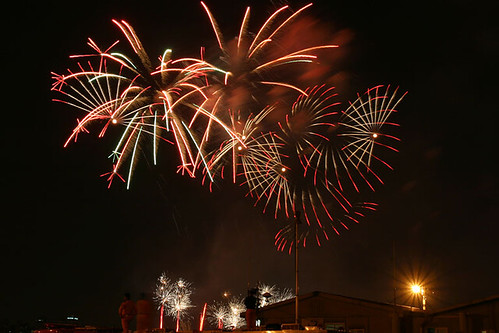 Seoul International Fireworks Festival is Seoul’s premier fireworks festival. The annual festival began in 2000. Designated an official World Cup cultural event, the first fireworks festival was held in October 2002. Seoul International Fireworks Festival is a public service event by the Hanwha Group which draws some one million visitors every year. In fact, it is one of the country’s biggest events, about a quarter of Koreans have seen the event over the past decade.

The eighth Seoul International Fireworks Festival will be held at the Hangang Park Yeoido District on Sept. 26. World-class teams from 10 countries, including Japan, the United States, Australia, Italy and Hong Kong have participated in the event in the past. This year, Hanwha, China’s Sunny and Canada’s Apogee will take part. A multimedia show combining music, video, laser and water system will make its debut as the opening act.

For those who cannot come down to the river to enjoy the fireworks, the event will be broadcast live on the radio on 100.7MHz so that they can watch the fireworks even from afar. An internet live broadcast will also be available, providing real-time coverage of the event. Many other programs will be available before the fireworks for the people to enjoy, such as photo service provided by Hanwha, face painting, caricature drawing and balloon art festival.

Fireworks photo contest and UCC contest will open to the public starting Sept. 26. The winners will receive their prizes at an awards ceremony at the Hanwha Group headquarters and the winning entries will be displayed both offline and online. Suggestions and requests for future Seoul Fireworks Festivals can be submitted to the festival website after the event. There will be generous prizes for the participants.