The Big Barrages From Epic 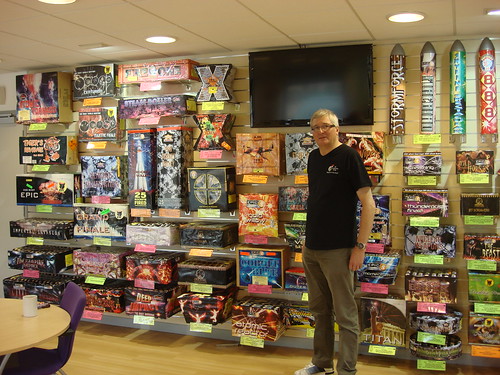 FOUR weeks to go now! Remember when it was ten weeks ago? That doesn't seem a moment ago - and yet, in that amount of time again, its bonfire night! Life is beautiful this time of year, don't you think? So, with four weeks, lets check out 5 of the best large barrages in the range. You might have read about these before - but lets talk about them again.

THUNDEROUS FINALE - A classic in its own lifetime, this 80 shot beast sends up waves of big, loud , colourful effects. High Quality pyro, a long duration, excellent hang time and overall beastliness make this one that fits in any quality display. In terms of a single fuse and variety and duration, its top notch.

IMPERIAL INVASION - Now, whereas big bold bangs and bursts was the order of the day with thunderous finale, this one gives you some real variety- fast paced small bore comets, massive bore mines in this firework, crazy sonics, nice colourful bursts and some rat-a-tat machine gun type bursts, and a lovely crackle finish - and great duration too.

CRESCENDO - Lots of power in a big triangle! Mines, whistles, bursts and crackle. Basically, take the run of good quality 1.3G effects, stick them all together and send the lot up quickly- from one fuse. As good as lighting several fireworks together, and generally, just completely manic.

VENUS SKY TRAP - The good old fashioned fanned barrage - waves of fans send up a varity of effect, each one with a massive presence in the sky. Use this and you may well get asked "Is this a professional one?" Well, no, it's Cat 3!

So, Four weeks to go - what are you waiting for people!!

Last year being the first year since 1997 the British Fireworks Championship had to be reluctantly cancelled due to t...
Read More
Filed in: Big Barrages
Share:
Find us on Facebook Find us on Twitter Find us on Pinterest Find us on Instagram Find us on Tumblr Find us on Vimeo Find us on Youtube Find us on LinkedIn Find us on Flickr
Previous article Clacton Pier to celebrate 150th birthday with free firework displays