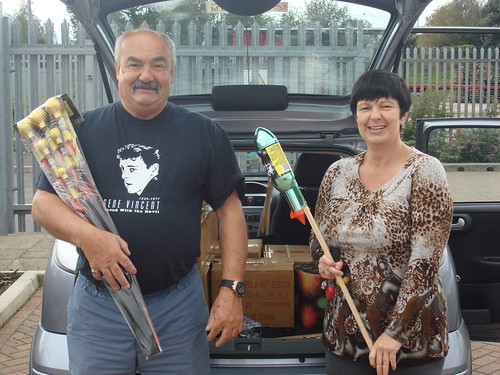 It is a delight every year for us every year when we see customers who have been coming along for years but more especially, the new visitors to Epic who have never shopped with us before.

This morning we have received an email from a customer who had never visited us before and heard from a colleague at work about our product so he came along to see what we were all about on Friday. He and his son walked into the showroom and being like a big boy toy shop, the delight on their faces was apparent from the outset.

They discussed their budget and the display they were hoping to achieve and we helped them to make the choices which were best going to meet this. They left us with smiles on their faces and we awaited the feedback.

Here is an extract taken from the email:

“We held our village display on Friday night, the weather was set fair and we had a very good crowd turn up, about 450 people.

7.30 arrived and we lit our first Firework, for the next 25 minutes the audience were spellbound, there were ooh's and aah's and constant applause. The display was awesome!! You supplied the best fireworks we have ever had. They absolutely filled the sky, we have already decided that we will have to go further back from the crowd next year, probably into the next field!!

I have already received loads of E Mails from villagers saying what a good night it was, and the fireworks were the main topic of conversation in the village shop yesterday morning.

My family have been helping to run our Bonfire Night since they started (25 years ago), and we are all unanimous: Friday Night was easily the best.

We will be seeing you again next year and again I thank you again for giving us such a good night”.

This is just one of the emails received over the last couple of days about the fireworks customers have bought and reports of the delight that they brought to gathered crowds from John O Groats to Lands End.

Keep em coming and I will be sure to feature more on future features.

If you have yet to plan your display or indeed were disappointed with the show that you went along to this year, why not create your own.

If you come along to see us at Head Office in South Yorkshire, we have packs starting from £24.95 for garden fireworks events and £295.00 for a consumer DIY display pack which is sure to have the crowds talking for weeks to come.