One thing that the Spanish are known for doing well is a fiesta and the international fireworks competition in Tarragona has everything associated with them. Warm summer evenings, music and street entertainment along with a mixture of traditional dress, tapas tasting areas and spectacular fireworks makes this one not to be missed.

Dating back to 1990 it is now one of the most important festivals across the med with more than 60,000 spectators visit the city to enjoy the open-air style party.

Several applications are received each year from Europe and beyond all hoping that they impress the selection board enough to secure a place in the competition. Funding is offered towards the shows but also there are strict criteria to be met for every team. The winners not only grab the 1st prize but they also fire at the Santa Tecla festival in September.

A family run business that is now in its 4th generation. Formed in 1895 they have won the VII pirotechnia comp city of el ejido (champion of champions) in the edition of the pyro-musical show in 2002 and 1st prize in the international fireworks contest city of el ejido in 1999 and 2000.

Emerging in 1890 this team is also on the 4th generation of management. As well as producing and launching some fantastic displays they also are manufacturers and designers of fireworks. They have brought the latest advances in security, production and quality control to performances.

The manager Antonio Garcia Juan has run the company since it was created in 2015. He has gained his experience from different fireworks workshops before creating his own company. This will be the second time that they have taken part in the competition hoping to show the crowds and judges the potential they have with their new Valencian fireworks.

Specializing in the designing of musical pyro shows, performances, special and digital effects they have a central European style. The French company first began in 1991.

The shows are from 10:30pm each evening from miracle beach so make sure that you arrive early to grab yourself a viewing spot. If you can’t get to the beach there are local restaurants, hotels with viewing places. In fact, anywhere and everywhere in the city and the surrounding areas, you will find a place to view. 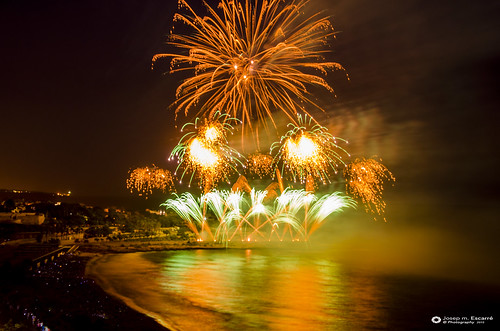