Stellar Fireworks for 2009: Year of Astronomy

"Looking for all the world like a New Year's fireworks display," is how NASA describes this Spitzer Space Telescope image of a star-forming region 6,500 light-years away in the constellation Cassiopeia.

We count on NASA to come up with space images that suit every festive occasion. We've seen images that fit the themes of Halloween and Christmas. I guess stars are like clouds, you can see in them anything imaginable. 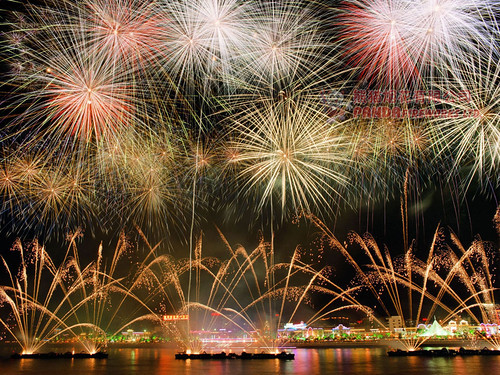 NASA says this picture "is the best example yet of multiple sun-like stars being stripped of their planet-making dust by massive stars."

Radiation and winds from the massive stars (white spot in center) blast planet-making material away from stars like our sun, according to the NASA caption."The planetary material can be seen as comet-like tails behind three stars near the center of the picture. The tails are pointing away from the massive stellar furnaces that are blowing them outward."

I generally leave blogging about space news to my colleague Victoria Jaggard. Victoria is our space editor and author of the news blog Breaking Orbit, which she describes as a global discussion about all things extraterrestrial. Check it out.

Victoria will be in California next week for the winter meeting of the American Astronomical Society. Space geek that she is, Victoria is already sending us enthusiastic emails about the agenda, so look out for stories on the National Geographic News Web site.

A highlight of the AAS meeting, and another reason why I chose to use NASA's "Stellar Fireworks" image today, is that tomorrow, January 1, is the beginning of the International Year of Astronomy. You can read more about this on Victoria's blog.

Here at Epic we celebrate all cultures and celebrations and Chinese new year is no different so here are some facts y...
Read More
Filed in: Fireworks, nasa, space, stars, Stellar
Share:
Find us on Facebook Find us on Twitter Find us on Pinterest Find us on Instagram Find us on Tumblr Find us on Vimeo Find us on Youtube Find us on LinkedIn Find us on Flickr
Previous article EPIC VERSUS THE GLOBAL SHIPPING CRISIS