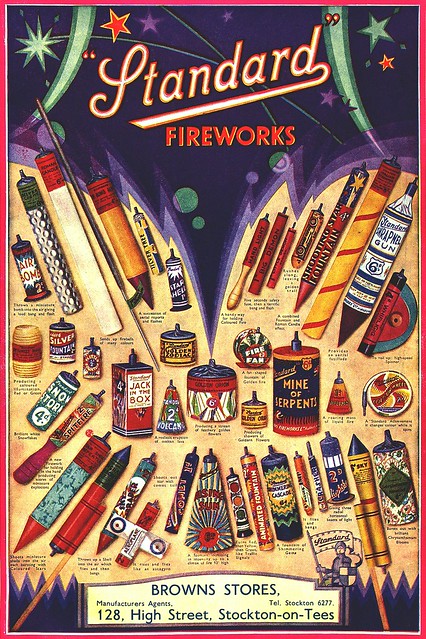 This rather fetching poster harks back to pre-decimalisation and to a time before some of the more dangerous pieces were taken out of the equation.

If you check out the pictures, there is an aeroplane one, a whirligig and some bangers, all of which have been banned in the UK along with firecrackers for some time now.

Our best advice is to ask advice from any specialist retailer rather than a pop-up shop as these are in it for the money rather than ensuring the safety of the consumer.

If you are offered either firework that has to be thrown (like planes or bangers) or true Chinese Firecrackers refuse them and report the incident to the local Trading Standards who will look into the matter.

We work closely in conjunction with HSE to ensure that all our products are up to BS standard to reduce the risk of possible injury.

If you would like to see some more old posters etc, just check out the Epic Fireworks photo-stream where there are literally hundreds of them to browse through from the early part of the 20th century onwards.

Thanks to constant improvements in firework manufacturing, and a thirst from importers to deliver the most impressive...
Read More
Filed in: Bonfire Night, Pyrotechnics, Standard Fireworks
Share:
Find us on Facebook Find us on Twitter Find us on Pinterest Find us on Instagram Find us on Tumblr Find us on Vimeo Find us on Youtube Find us on LinkedIn Find us on Flickr
Previous article AUTUMN LIGHTS RETURNS!