On the 6th of August 1965, Singapore became independent from Malaysia and 2015 marks the 50th (Golden) Anniversary of Independence.

For the last few months over 2000 people have been rehearsing day and night for the main parade which will last around 50 minutes. Before the big day arrives the marching and military bands will have fine tuned their displays to perfection in readiness for the parade which will take place by the Padang seating area. The Presidential gun salute will be fired from one Fullerton/Merlion Park and the pledge will be taken at the floating platform near to Helix Bridge.

With a golden theme throughout the show, this will be the biggest ever display to mark their national day.

Fired from two huge barges moored in the bay and for the first time the Adelphi and Swissotel buildings will be fitted with pyrotechnics. Five other landmarks will also be part of the show: The Suntel Tower 1, the Pan Pacific Building, UOB Plaza 1, Republic Plaza and the Maybank Tower. This amount of sky coverage will offer the crowds in the bay a 360° view of the action where the fireworks will be fired from the top and sides of the sky scrapers overlooking the bay. 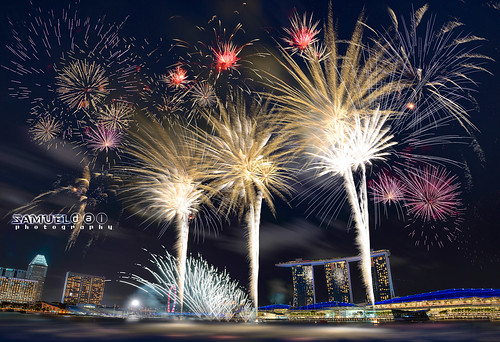 The main barge floating in the bay, at a massive 300 metres in length will feature heavily in this spectacular show as a rainbow arc effect not seen before has been specially designed to thrill the masses.

As the show comes to its climax, showers of gold will be fired high towards the crowds sat in the Padang seating area with an extra special golden jubilee shell fired from its own barge. The event is sponsored by the Singapore Tourist Board with a budget of over a million Singapore dollars and it promises to be one of the best shows yet.

Here at epic fireworks we are looking eagerly forward to the 6th of August when we will be able to witness the fireworks spectacle with the power of the internet.

In the meantime, here is a taster of last year’s event.

Mine cakes are a harder to find, seldom seen, firework which unlike traditional mines are made up of multiple tubes a...
Read More
Filed in: fireworks display, National Day Fireworks, singapore
Share:
Find us on Facebook Find us on Twitter Find us on Pinterest Find us on Instagram Find us on Tumblr Find us on Vimeo Find us on Youtube Find us on LinkedIn Find us on Flickr
Previous article SOUTHEND’S FIREWORK DISPLAY IS TO MAKE A COMEBACK THIS YEAR!