See in the New Year in style at Berlin's Brandenburg Gate 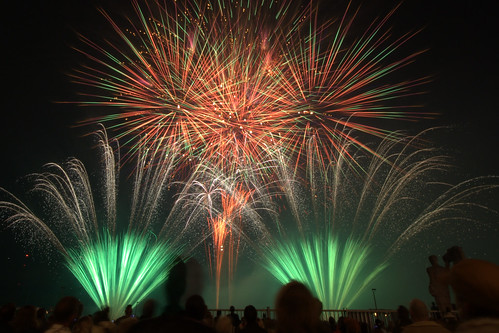 BERLIN, New Year's party-goers may want to consider taking in the midnight fireworks display and musical performances on offer at the Brandenburg Gate in Berlin.

The annual show that always goes off with a bang will incorporate live music with an extravagant fireworks display to mark the beginning of 2010.

Anyone staying in hotels in Berlin over New Year is advised to make the most of the free event that is guaranteed to be an entertaining and enjoyable experience.

More than one million people make the trip each December to visit one of Berlin's most iconic landmarks to see in the New Year.

The Strasse des 17. Juni, which runs from the Brandenburg Gate to the Victory Column, is transformed into a festival site offering a number of stages, party tents, food and refreshment stalls and light shows to entertain revellers in the German capital.

A spectacular fireworks display will mark the end of 2009 in an explosive fashion and the party is sure to go on into the early hours of the morning.

Jessica Reading, head of marketing for LateRooms, commented: "Demand for New Year's Eve in Berlin is always significant and we recommend that anyone considering attending should book the hotels Berlin as early as possible.

FACT: Japan produces some of the world's biggest and best fireworks, including record-breaking monster-sized shells l...
Read More
Filed in: 2010, berlin, Brandenburg Gate, Fireworks, germany, new year
Share:
Find us on Facebook Find us on Twitter Find us on Pinterest Find us on Instagram Find us on Tumblr Find us on Vimeo Find us on Youtube Find us on LinkedIn Find us on Flickr
Previous article EPIC VERSUS THE GLOBAL SHIPPING CRISIS