WHAT: SECHSELAUTEN FESTIVAL
WHY: SPRING FESTIVAL
WHEN: MONDAY 18TH APRIL 2016
WHERE: ZURICH, SWITZERLAND

When the flowers and the trees start to bloom and the days begin to get longer, the folk of Zurich celebrate Spring in the age-old way. 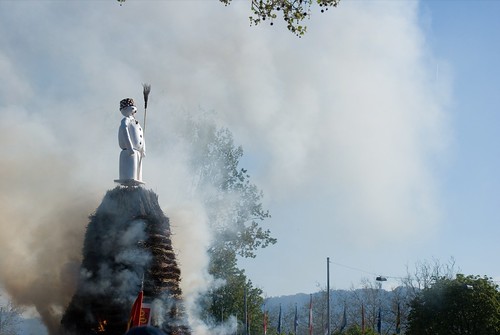 The event dates back to the 16th century when the local townsmen and various Guilds decided that as in Winter, thanks mainly to the failing light, the end of the working day would be 5pm. However, in Summer this loss of an hours toil was perceived as un-necessary. So, they discussed the matter and decided to have their working day in Winter end at 5:00pm and from the first Monday after the Spring Equinox, this would henceforth be 6pm. The change of working hours was announced by the ringing of the largest bell: The Grossmunster.

The Sechselauten today is held on the third Monday in April following a change in 1952.

Traditionally, once all the floats, parades etc have progressed to the Bonfire site, the fire is lit at 6pm precisely and it is said that the quicker the fire reaches the Boogg’s Head and it explodes, the better Summer the locals can expect.

At 8pm the event draws to a close with an ‘unofficial public sausage BBQ’ which takes part on the hot embers of the remains of the Bonfire. Some of the locals think the event rather ‘snooty’ as it is the more affluent members of society who are largely involved in running this event; until the sausages come out at least!!

It is yet another example of the use of pyrotechnics in chasing away the winter in preparation for the forthcoming year, not far away I am sure from other such festivals around the world hoping for good weather for 2016.

If you’ve ever been to a fireworks display, or even dabbled in setting off your own smaller display at home, you may ...
Read More
Filed in: Fireworks, SECHSELAEUTEN FESTIVAL, SECHSELAUTEN FESTIVAL 2016, Snowman, Zurich
Share:
Find us on Facebook Find us on Twitter Find us on Pinterest Find us on Instagram Find us on Tumblr Find us on Vimeo Find us on Youtube Find us on LinkedIn Find us on Flickr
Previous article SOUTHEND’S FIREWORK DISPLAY IS TO MAKE A COMEBACK THIS YEAR!