Easter is almost with us, what do you do if you are in Florence, Italy, want fireworks and want traditional entertainment and solemnity with it? Simple, the Scoppio del carro has it all!!

The Scoppio del carro or Explosion of the cart is a great old folk tradition for the city of Florence. Every Easter a cart loaded with fireworks is paraded through the town then ceremoniously ignited by a rocket on a wire to provide a spectacle, fulfilment of a pagan ritual and a great tourist attraction, not necessarily in that order.

This ceremony dates back to the time of the Crusades and celebrates the brave exploits of one warrior, a man called Pazzino de'Pazzi this Florentine is revered for being the first man to climb the walls of Jerusalem in July of 1099. This brave deed won him the respect of his comrades and his commander and he was awarded two shards of stone from the Holy Sepulchre, shards which were later used to start an annual "holy fire" during Holy Week. This ritual fire used to be carried through the city as a religious relic.

So started the tradition of Scoppio del carro, by the middle ages the flame was carried in a simple carriage or carro. By the 15th century this had evolved into the towering 30 foot tall structure that is still used today. Traditionally it is pulled by white oxen which are covered in flowers and foliage from the first spring plants and accompanied by soldiers, musicians and fancy folk in period dress. The procession starts at the Porta al Prato (door of the Pratt?) and moves to the Piazza del Duomo. That’s where the action is. 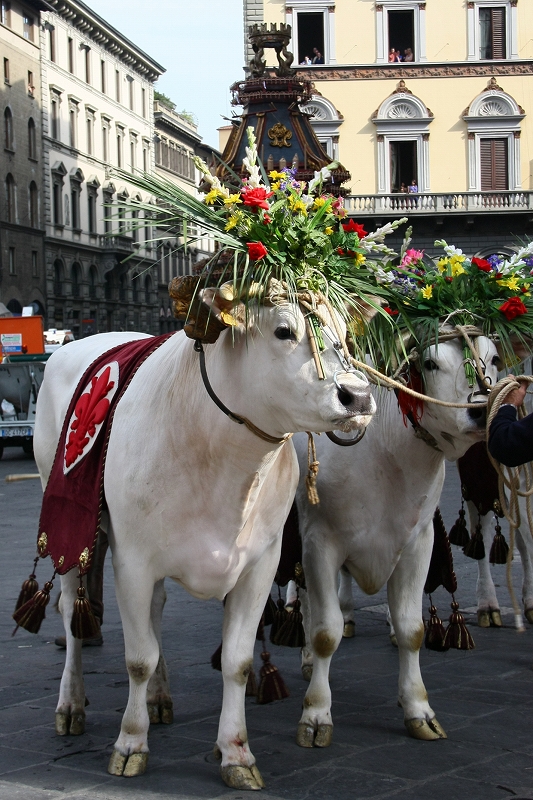 Now onto the good part,

The antique Cart is loaded up with fireworks and pyrotechnics and after being paraded through the streets makes its way to the cathedral square. A thin wire is stretched up to the high altar inside the cathedral. The bells of the Giottos campanile ring out the whole time, and at the appointed moment, the cardinal of Florence lights the rocket head (often called a dove or “columbina”, but in the UK we would call it a pigeon, that shows you the Italians have got class, what we call a pigeon, they call a dove) with the holy fire from the stones. The dove shoots with holy fire to the cart piled high with fireworks, the cart ignites and wheels spin, flares flare, and candles, well, hmm candle. The crowd cheers and another good harvest (pagan again) is assured and good fortune and blessings are upon Florence. The Dove shoots back into the church, presumably to be extinguished by someone distinguished. 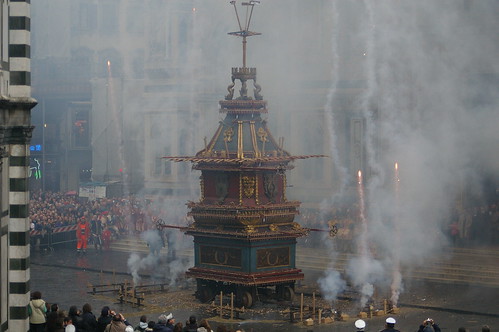 And the fireworks blast out, a 20-minute display follows and is enjoyed by all. So if you are in Florence, Italy this Easter and are looking for a fireworks display with a difference. Head along to the Scoppion del carro, you will not be disappointed. 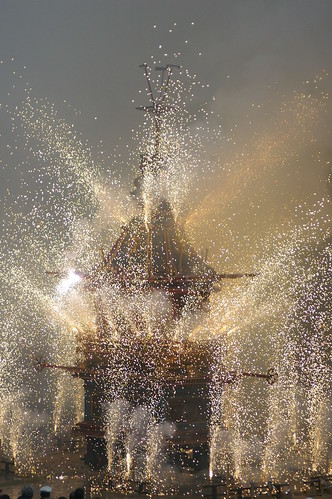 Want to learn about other traditional uses of fireworks throughout the world? No problem, Epic Fireworks have got it covered at our Fireworks Learning Centre

WHAT: THE BRITISH FIREWORKS CHAMPIONSHIPSWHEN: TUESDAY 17th & WEDNESDAY 18th AUGUST 2022WHERE: PLYMOUTH HOE, THE ...
Read More
Filed in: Easter, explosion of the cart, Fireworks, florence, scoppio del carro
Share:
Find us on Facebook Find us on Twitter Find us on Pinterest Find us on Instagram Find us on Tumblr Find us on Vimeo Find us on Youtube Find us on LinkedIn Find us on Flickr
Previous article BUYING FIREWORKS AS A GIFT