WHAT: RUSSIA’S VICTORY DAY FIREWORKS
WHY: CELEBRATIONS FOR THE 73RD V-DAY ANNIVERSARY
WHERE: RED SQUARE, MOSCOW, RUSSIA
WHEN: 9TH MAY 2018

Vladimir Putin and his closest high-ranking officials alongside Benjamin Netanyahu, the Israeli Prime Minister and Aleksandar Vucic the Serbian President enjoyed the celebrations for the 73rd V-Day Anniversary in Red Square, Moscow yesterday.

The Annual parade included 13,000 serving men and women from the Russian Military and gave President Putin the opportunity to showcase some of the recent additions to the military vehicles they have helped to develop. There are around 100 new state of the art military and armoured vehicles and machinery recently added to the arsenal in the Russian armed forces including the brand new Sukhoi Su-57 which has been billed as the most dangerous stealth fighter around and with a $50 million price tag, not exactly cheap either but they plan to add them to their fleet. They also demonstrated the hypersonic missiles with a range of over 2000 kilometers and armored vehicles with anti-tank missile launchers. 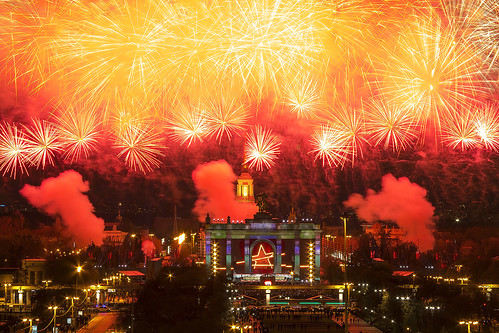 The parade is essential to give thanks for the Russian’s eventual win over the Nazi forces. It was, of course, a very costly war for the Russian’s as during WWII, they lost around 20 million of its people. When Hitler invaded Russia in mid-1941, they were hoping to have taken Moscow by late Autumn but one week after the German invasion, 150,000 Russian soldiers had met their deaths and over the course of the war, 20 million became prisoners of war. Over the whole of the war, the Soviet Union lost 31.1% of their population compared to the losses in Britain at just 3.3%.

Whether you love him or hate him, Vladimir Putin is getting a little fed up of the bully boy tactics of the West who would like to dictate what the people of his country and the military forces are permitted to do. Coming from countries run by a complete prat (USA) and one which has enough problems of its own without sticking their ‘four-penn'orth’ into the affairs of others (Israel) and ourselves, who in our time have taken over India, Pakistan, most of Africa and of course the USA, why should Russia not be permitted to defend itself and its people from the prospect of war or indeed a repeat of the last one where the losses frankly were unacceptable.

The fireworks were seen across the City.

Around this time of year, fireworks are in high demand for obvious reasons, Guy Fawkes/Bonfire Night being the main r...
Read More
Share:
Find us on Facebook Find us on Twitter Find us on Pinterest Find us on Instagram Find us on Tumblr Find us on Vimeo Find us on Youtube Find us on LinkedIn Find us on Flickr
Previous article THE HISTORY OF SKY LANTERNS