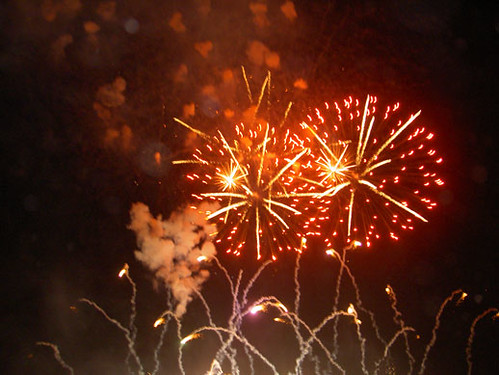 Ten tons of pyrotechnics, bright new lights arching over the Virginia Street casino strip, ice skating and a variety of hotel parties will make for an explosive, if chilly, New Year's Eve in Reno.

Ken Lantis, the owner of Lantis Fireworks and Lasers of Draper, Utah, says the aerial display, to be launched from the top of four hotel towers, will be more concentrated, the explosions closer together than typical fireworks show in Las Vegas which are spread out over a larger area. Canceled last year because of budget cuts, the reinstated midnight spectacular is sponsored by a handful of downtown casinos and the City of Reno.

Fireworks will be launched from the top of two Silver Legacy Hotel towers and the roofs of the Cal Neva and Harrah's. Pyrotechnics will be choreographed to the music of Michael Jackson, says Lantis, whose company has staged fireworks shows around the world.

The 15-minute display is an optimum time for the winter production, he says. "We want the show to bring people up and let them down, then bring them up again. When they walk back inside, they're exhausted at seeing fireworks," he says. "We want people to say they've never seen anything like it."

Boulevard celebrants will also see new lights that seem to twinkle brighter above Virginia Street - in the city's trademark arch. Some 2,076 incandescent bulbs were recently replaced with high-energy 2.5-watt LED bulbs as part of a city energy efficiency program.

The city's Rink on the River will also be open for ice skating, until 11 p.m. Next to the Truckee River, where it flows under the Virginia Street Bridge, the rink offers skate rentals and will be open, weather permitting. Heavy rain, snow or temperatures that are too warm for the ice, will close the rink, although the latter possibility is unlikely. The average low January temperature in Reno is 22 degrees. To keep visitors warm, hotel casinos have planned an assortment of New Year's Eve parties, listed above.