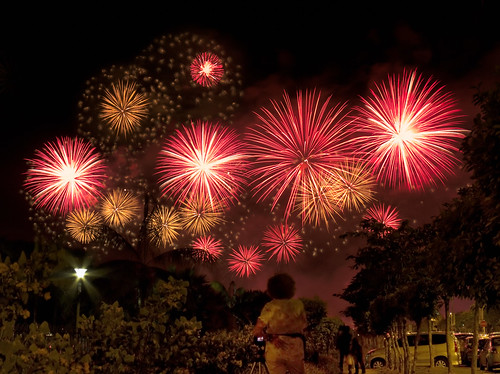 The Putrajaya International Fireworks Competition of PIFC is coming to a close the first weekend in October. The start of the event coincided with Malaysia’s celebrations for their 56th anniversary of Independence.

This magnificent event, held at Putrajaya’s Maritime Centre in Precinct 5, Wilayah Persekutuan, Malaysia offers simply spectacular views and with the pyro reflected back on the water – the resultant effects are breathtaking.

The teams, competing over several dates from 30th August to 2nd October were all to give the crowds a 25-minute display synchronised to music.

The competing teams and display dates:

• Malaysia – 30th August 2013 – A nice use of colours but in my opinion, the symmetry is a little off and the fireworks were a bit random with the mixture of fireworks.

• South Korea – 31st August 2013 - Really impressive and a good use of colours. The smiley face shells went a little bit awry but overall, an excellent show with some good great ground works with excellent colour and some cracking reports – great symmetry!

• France – 13th September 2013 – Sadly, there was either a great deal of smoke or fog around which did impact on the quality of the footage seen but it gave a very ethereal quality to the show overall. Brilliant with plenty of variety but without it appearing as if someone has just thrown everything in the storehouse at it. Some beautiful whispering palms but then again, I’m always a sucker for them.

• China – 14th September 2013 – Some fantastic aerial shells but a bit ‘samey’ from a colour point of view. Great use of bronze and reds together in the finale and a much evener pace and set up. In their defence, there was constant drizzle (which of course means everyone and everything was wet through) which will no doubt have had a huge impact on the show.

• USA – 15th September 2013 – Absolutely beautiful with some great use of colour combinations and exceptional pyro. The love hearts and spaceships were just lovely. The USA’s ground-works were absolutely exceptional.

The final display, due to fire on 2nd October 2013 will be the work of the United Arab Emirates with the team from Dubai ready to take on the rest of the World in this brilliant showdown.

The 3 million or so visitors to this year’s competitions have all been fortunate enough to have a splendid choice of diverse entertainments including traditional dance, good and musical performances.

We will bring you news of the winner once they are announced.