The stars took a backseat Sunday night as the United Kingdom and China staged their pyromusical extravaganza in the skies above the Manila Bay.

Thousands flocked to the breakwater area of the SM Mall of Asia even before the famous Manila Bay sunset, parking their picnic mats and baskets on choice spots. Latecomers would have to brave the thick crowd that were limited behind strictly enforced cordoned-off areas unless they made last-minute purchases for tickets.

The 1st Philippine International Pyromusical Competition is being held on five consecutive Sundays in February and March. Eight countries are participating in the sensory showdown of fireworks set to popular tunes - the type you recognize but can't seem to name, whether you're having a senior moment or you're simply lost for words because of the spectacular display.

The United Kingdom, represented by Jubilee Fireworks, staged its show almost 30 minutes later than its 7 o’clock schedule, but the eager audience didn’t seem to mind. Everywhere you looked, there was something to see, eat, or drink, so waiting was no trouble at all.

China, represented by Liuyang Jinsheng Fireworks Company, had heads turning this way and that, as they weren’t content with centre stage. Throughout the performance, sparks would suddenly shoot up from the left and right. This was good for stiff necks but bad for cross-eyed members of the audience.

Early planners who availed of the more expensive VIP tickets enjoyed buffet dinners with the cool breeze, but others who chose to sit on the pavement or on the steps appeared just as content, if not happier. 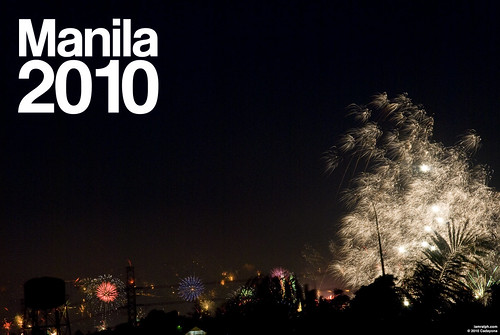 The thing about watching fireworks is you must be prepared to get a stiff neck. Especially if the show is twenty minutes long.

Next time you watch fireworks, close your eyes for a few seconds and observe how humans lose their ability for coherent speech. All you will hear are ooohhhhs and aaaaahhhhhs and mmmmmmmms.

Fireworks fanatics had their fill of fantastic pyrotechnic fancy, as there were fireworks like you’d never seen before. Fireworks of every colour of the rainbow, and every imaginable shape, were so awe-inspiring you’d almost forget that these cost millions of pesos – and leave the already grey skyline a gloomy shade of ash.

Some fireworks were star-shaped, some flashed before fading away, and others seemed to trickle light into the sea.

They seemed to be mocking the stars, which were nearly invisible in their rightful territory. The stars slept smugly, knowing they’d be there night after night, but the fireworks will ignite the sky for a limited time only:

Those planning to catch the coming shows should come prepared to brave what seems like the entire Metro Manila population, and to bring their own trash bags. As usual, the streets were left covered with litter.

The Philippines’ very own Platinum Fireworks, which is not competing in the event, will perform the closing exhibition on March 14 at 8:00 pm. – YA, GMANews.TV

The absolute best fireworks in cinema, a countdown:Nothing beats watching a mesmerizing firework display with your ow...
Read More
Filed in: 2010, Fireworks, international competitions, Philippine International Pyromusical Competition, Philippines, phillipine, Pyrotechnics
Share:
Find us on Facebook Find us on Twitter Find us on Pinterest Find us on Instagram Find us on Tumblr Find us on Vimeo Find us on Youtube Find us on LinkedIn Find us on Flickr
Previous article INSTANTLY LIGHTING OVER 10 KILOS OF EPIC FIREWORKS