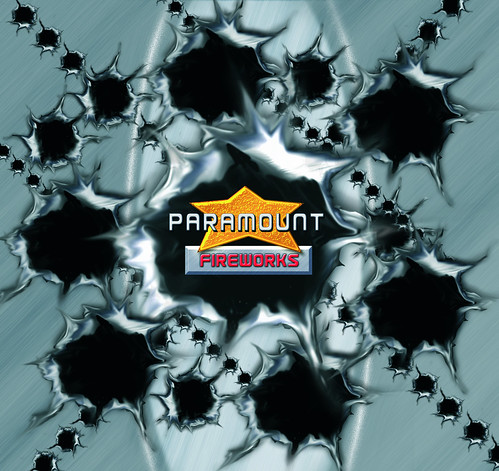 Introducing Paramount Fireworks! Firstly, a cool grey design on the label with a bullet hole effect means this is an easy enough one to spot! From £5 cakes to Massive SIBS, with a great deal in between (including some nifty rockets) this is a brand any proper enthusiast will want to try - if you haven't already!

Here is an unoffical "top ten" - feel free to reply with your own.

At TEN..... The Echo Bomb rockets! Volume and stars from this no frills noise maker! at £15 for 5, its not going to break the bank, either! BANG!

At NINE.... Thunderking! You like noise, right? For well under £10, this little banger will do the job!

At EIGHT.... Ultimate Devastation! Many effects, a fast pace throughout and a lovely crackle ending on this big beauty!

At SEVEN.... Optimum! For a break from the mega-lod ones, try this cheerful little item - deep red bursts with a rat-a-tat crackle burst as well!

At SIX... Flip Mode! A popular three stage effect, running fans with delayed crackles and large bursts, whsitles and volume. A very popular item, and amazing that its still around at a price like this.

At FIVE! Sky Force! A proper "big rocket" at the sort of price that would have been a very nice bargain 6 or 7 years ago... excellent!

At THREE! Fragma! The ever popular 19 shot hexagon, and this is as good as it gets at this price - massive bursts, lingering and crackling palms. Outstanding pyro!

At TWO! Magneto! The bigger brother in many ways of Fragma, with 36 of the best effects from this cake - stella performance, and rivals stuff that sells for at least twice the price!

At ONE! Whispering Palms! Professional quality, simple as. Size, duration, hang time on this are 5 stars all round. One of the few fireworks that carries a totally genuine "wow" factor, and one that needs no more introduction other than to say its fantastic!

A notable mention, of course, to the others from Paramount who didn't make this list!

Since the discovery by a monk in China almost a thousand years ago fireworks continue to thrill and astonish young an...
Read More
Filed in: paramount fireworks
Share:
Find us on Facebook Find us on Twitter Find us on Pinterest Find us on Instagram Find us on Tumblr Find us on Vimeo Find us on Youtube Find us on LinkedIn Find us on Flickr
Previous article FIREWORK EFFECT TIE DYE T-SHIRTS