The first of this year’s magical Firework Champions events, takes place on Saturday 23rd July in the grounds of the spectacular Newby Hall just outside of Ripon. The magnificent Georgian Hall was designed under the influence of Sir Christopher Wren and the architecture of this majestic building embodies everything of beauty from the era.

Newby Hall is currently the home of Mr & Mrs Richard Compton who’s family have owned the property for the last century when it was inherited by Lady Mary Vyner who married Lord Alwyne Compton.

Lady Mary’s son, Frederick Grantham Vyner was overseas visiting places of interest in Greece, when he and his travelling companions were taken hostage for a ransom of what would be over £1 million sterling. Sadly, despite Lady Mary making an interim payment, he was killed by his captors.

As a memorial to her beloved son, a church was erected in the grounds in a gothic revival style named Christ the Consoler.

The teams competing at Newby Hall this year are as follows:

Stapleford (Nottinghamshire) based Magic and Miracle Fireworks was established in 1994 and continues to grow both in the wholesale/retail market and the professional pyro musicals and corporate/tv events. The show has been designed by Phil Dixon and Ashley Woodward and they will be using a FireOne electronic firing system.

Based in Riddlesden (Bradford), the company was established in 2009 but have been in the firework business for almost 20 years. The company are really going from strength to strength and they were worthy winners of last year’s event at Capesthorne Hall. The display will be designed by Phill and Rebecca Cooper using an in house modified FireByWire system. Having such a rewarding experiences at previous year’s Firework Champions events, we are sure they are going to do their best to make it three on the trot.

10.40 Once all of the competitors have shown their wares, the organisers MLE Pyrotechnics take to the stage whilst the public votes are cast and counted. MLE’s display will not be subject to competition rules so you may see some really new and innovative pieces.

The gates open at 5.30pm to allow people to get settled before the competition gets underway. You are welcome to bring along a picnic and take your positions for best views early doors. Camping overnight is available in the field next to the car park at £10 per adult per night.

What better way to spend a warm summers’ evening, than in the company of your nearest and dearest, tucking into sandwiches and a glass of something sparkling watching the finest exponents of pyrotechnics in the UK battle it out in the balmy night sky over a stunning setting.

We will of course bring you results details after the event. 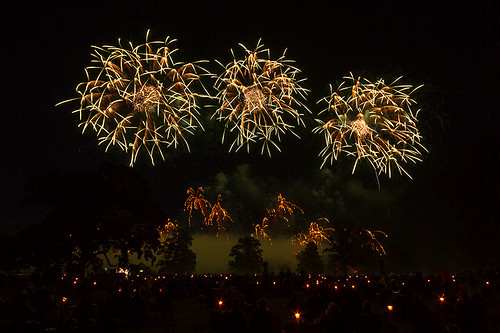 There is nothing more spectacular than watching a firework display which has been perfectly designed to music. That s...
Read More
Filed in: 2016, Firework Champions, firework competition, Newby Hall
Share:
Find us on Facebook Find us on Twitter Find us on Pinterest Find us on Instagram Find us on Tumblr Find us on Vimeo Find us on Youtube Find us on LinkedIn Find us on Flickr
Previous article SOUTHEND’S FIREWORK DISPLAY IS TO MAKE A COMEBACK THIS YEAR!