The upcoming 2010 New Year fireworks show at Taipei 101 (one of the world's tallest skyscrapers) will be the most spectacular and colourful ever presented by the organisers, an official said Wednesday.

This will be the sixth year that the tower will ring in the New Year with a dazzling fireworks show and a record NT$30 million on the show will be spent on the show, which is NT$10 million more than last year, in response to complaints by revellers that the 2009 event was not exciting enough. 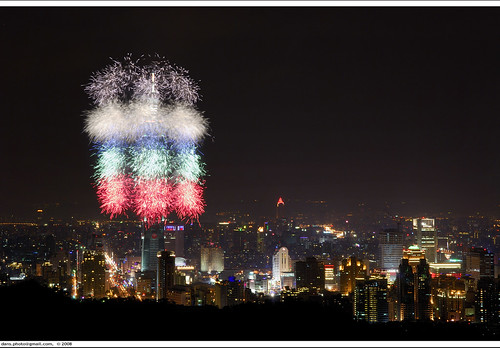 The show will also feature moving displays such as fire wheels, drifting stars and bouquet showers that will come in a full range of colours, including gold, silver, red, green, blue, purple and yellows as part of the celebrations, a New Year's Eve party will be held at the Taipei 101 observatory on the 89th floor of the building, and partygoers will be treated to presentations of magic shows, a live band performance and a close up view of the fireworks show.

Organised as a free event by the Mayor of London, this festival which takes place in Trafalgar Square is sure to be a...
Read More
Filed in: Fireworks, new year, Skyscraper, taipei 101
Share:
Find us on Facebook Find us on Twitter Find us on Pinterest Find us on Instagram Find us on Tumblr Find us on Vimeo Find us on Youtube Find us on LinkedIn Find us on Flickr
Previous article BLACKPOOL WORLD FIREWORKS CHAMPIONSHIP