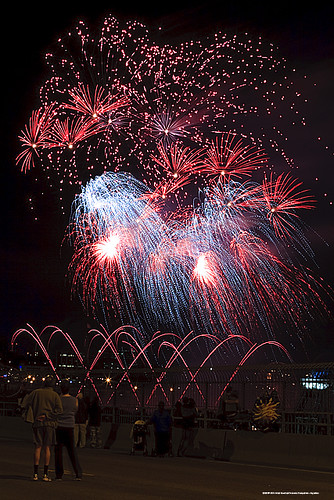 The Montreal International Fireworks Competition enters its 29th year and it remains THE biggest in Canada annually.

In previous years the organisers have tried a number of different formats from every Saturday beginning mid-June to later August to a twice-weekly affair and this year, once again, they will ring the changes.

Started in 1985 the original event was a mixture of classical and pyro-musical displays but as of 1987, the competition has concentrated on pyro-musical exclusively which involves the choreography of the beautiful pyro effects to a musical score. The first ever competition drew in crowds totalling almost 5.7 million viewers, made up of Greater Montreal residents and international visitors.

This competition, having attracted some the best aficionados of this skill in the World, has now become the ‘must have’ award, giving the winner one of the highest accolades in the World.

This year’s schedule of events is as follows:

There are five new competitors this year: Ian Riedel, Merlin Fireworks, Vulcan, Mirnovec Pirotehnika and Scarpato. The competition is the largest and most prestigious in the World (and is definitely by the largest in Canada (and North America for that matter). The format of the competition has been pretty much the same since 1987 - a 30 minute minimum pyromusical, though they experimented with a compulsory music segment one year. The schedule format changes from year to year, but this is driven as much by road construction as anything else. The actual competition format hasn't changed since the mid 1990s and it still is as popular as ever.

As the event is being held at Montreal’s premier entertainment theme park, there is also lots to do during the day if you are planning to make a day of it.