The competition at La Ronde is one of the largest and most prestigious fireworks competitions in the world. Locals and visitors are treated to 30 minutes of spectacular pyro-musical firework displays as the teams battle it out against each other to win the Golden Jupiter prize.

Showcasing the greatest hits of 1985 and spotlight on the successes that marked the eighties. These are one of the oldest firms in Canada and is a special presentation of Quebec.

The first to take to the stage are the leading fireworks company in South Korea. This will be the fourth time that Team Hanwa have competed in the competition.

Just recently the company has celebrated 110 years of existence in 2015. They have been entered into the Guinness book of record twice for the longest show in Kuwait and Beach on fire in Cavallino Treporti, Italy. This will be the second time of competing.

Founded 70 years ago this family fireworks company will be participating for the 5th time. They took first place and won the golden Jupiter award in 2012.

Canada – theme: We Walked On The Moon by BEM Fireworks.

One of the most important actors in Pyrotechnics in Canada and a 4th generation family owned business. They will be taking to the stage for the 4th time. In 2005 they won the bronze Jupiter award with their show Au Pied Du Corant.

Australia – Theme: Fires In All Their Forms by Howard & Sons

Won silver Jupiter in 2008, bronze and a special mention in 2011 for a soundtrack on Kakadu national park in Australia that featured a live performance of a digeridoo the ancient aboriginal instrument. This will be the fourth time competing.

Final of the Stars Of The Casino De Montreal 2019 – Theme: 25 Years To Entertain You In Big by Panzera & Rozzis Famous Fireworks

The two famous companies join forces together for the second time to bring the show to an out of this world finale. 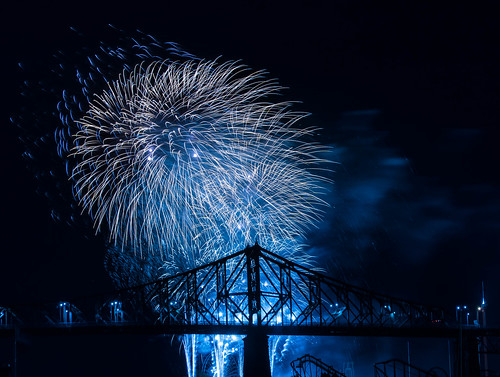 Rozzis was founded in 1895 by Paolo Rozzi and is a family run business well known for its pyro musical productions and impressive finales. They have participated 6 times and won the silver Jupiter in 1992 & 2005.

The Panzera family business founded in the early 20th century in Northern Italy. Maestro Giovanni Panzera is the creator and has been the artistic director of the Montreal competition from 1987 to 2000.

The finale will be a celebration of 25 years of the casino and will be a special presentation of Casino Montreal 25 1993/ 2018.

The best place viewing place for all the fireworks competition is within the site of LA ronde in the stands. Here you won’t miss out then on the pyro action unfolding in the skies, but you will be treated to a double show as the display reflects on the surface of the Dolphin lake.