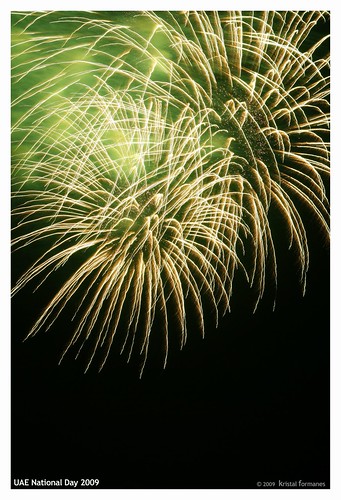 The night sky over Abu Dhabi and Madinat Zayed will light up with a series of stunning fireworks display this week to mark the 41st National Day. The height of some of the fireworks will be in excess of 150 meters and the 7-minute show on December 1st on the beach will feature some old favourites like comets, horses tails, volcanoes and some shells before going onto a number of synchronised 10-minute shows of up to 600 meters in length. Crowds in the tens of thousands are expected to join in the celebrations from 8:30 onwards.

The event, managed and choreographed by UK based WRG Creative Communications and Groupe F, one of the leading International Event Management agencies will coordinate the shows along the Corniche beachfront in Abu Dhabi which is set to feature more than 17,000 shots in the display from a variety of watercraft and on land.

National Day is a celebration for every person in the United Arab Emirates so making sure that everyone in the area can see the displays has been quite the challenge. The spokesman and General Co-ordinator of this fantastic event is Sultan Al Muhairi who said ‘Everyone loves fireworks and these tremendous shows will light up the sky in a sea of white, red and green and let everyone - nationals and expatriates alike - celebrate the spirit of the union’

All of the displays are set to an original song Ya Khalifatna (our Khalifa) inspired by the classic UAE song, ‘Zanaha Zayed’ which was a massive hit is 1996 and written by poet Arif Al Khaja

There are other National Day events which are still to be announced shortly and will include activities to keep all the family entertained including Emirati theatre shows at Abu Dhabi Theatre, a two-day Sailing Regatta and a one-off Cultural Festival at the Abu Dhabi Heritage Village on National Day.

For the petrol heads, there is also a display including thousands of creatively-dressed cars and 4x4s as they vie for a share of the 'Best Decorated' vehicle competition.

The exciting programme of events is set to also include superstar singers from across the Arab world will perform Khaleeji concerts at Abu Dhabi’si National Exhibition Centre.

Further information can be found here:

If you’ve ever been to a fireworks display, or even dabbled in setting off your own smaller display at home, you may ...
Read More
Filed in: abu dhabi, Fireworks, National Day, United Arab Emirates
Share:
Find us on Facebook Find us on Twitter Find us on Pinterest Find us on Instagram Find us on Tumblr Find us on Vimeo Find us on Youtube Find us on LinkedIn Find us on Flickr
Previous article SOUTHEND’S FIREWORK DISPLAY IS TO MAKE A COMEBACK THIS YEAR!