WHAT: Malta International Fireworks Festival 2016
WHY: To celebrate Malta's accession into the European Union
WHEN: Saturday 16th April, Saturday 23rd April and Saturday 30th April 2016
WHERE: The beautiful island of Malta
COST: Free of charge for anyone and everyone

This year marks the 15th edition of this fabulous fireworks festival and it continues to go from strength to strength. This tiny island is a hugely popular holiday destination for sun and history lovers alike.

Malta is a devoutly Catholic island and the religion plays a major part in daily life. The majority of festivals are based upon religious iconography and during the daytime on any of the feasts and saints days held annually, there will be parades and Catholic masses abound during the daytime to honour the local parishes patron saint and the evening is given over to marching bands, food, drink and of course FIREWORKS.

Whilst at the moment only one of the current venues has been announced (the last one, Saturday 30th April, will be held in Valetta, Grand Harbour ).

Fireworks have been part and parcel of the way of life in Malta since the time of the Order of the Knights of St John, whose members used to celebrate special religious feasts with pyrotechnics for example when a new Grand Master (the leader of the islands church), a new Pope is elected or indeed a new Prince is born to one of the ruling families of Europe.

Malta’s history is long and there is evidence of many changes to the rule of the Island from the early settlers arriving in 5200 BC who were Stone-age farmers and hunters through the centuries being ruled by the Romans, Greeks, Arabs, Muslims, Normans, Spanish and eventually British rule following the signing of the treaty of Paris in 1814 until they gained independence on 21st September 1964 – Not bad at all, only 7000 years to eventually gain freedom!

The island shows evidence of its military combat and is still home to two HUGE Armstrong 100 ton guns (cannons) which were used in defence of the Island for more than 20 years in the late 19th century.

Of course, for the ‘pyro widows’ there is lots to see and do and if you are an adrenalin junkie, you can take part in water-sports, climbing and abseiling, paintball or even horse riding. If on the other hand, you would prefer relaxing and taking a swim, get along to St Peters Pool just outside of Marsaxlokk; a natural pool with beautiful azure waters and flat rocks.

So, if you are holidaying in Malta in mid to late April, get along to watch some world class international pyrotechnics. 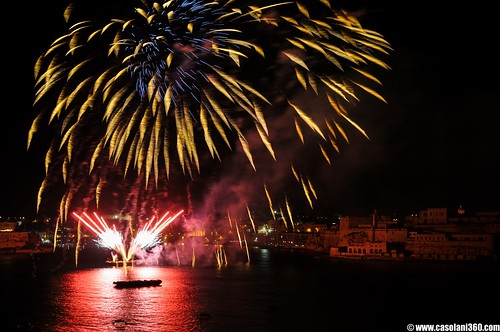 WHAT: Evening of shows and entertainment at Sheffield Botanical Gardens.WHY: To celebrate Bonfire weekend!WHERE: Bota...
Read More
Filed in: 2016, Fireworks, fireworks festival, International Fireworks Festival, malta, MIFF
Share:
Find us on Facebook Find us on Twitter Find us on Pinterest Find us on Instagram Find us on Tumblr Find us on Vimeo Find us on Youtube Find us on LinkedIn Find us on Flickr
Previous article THE HISTORY OF SKY LANTERNS