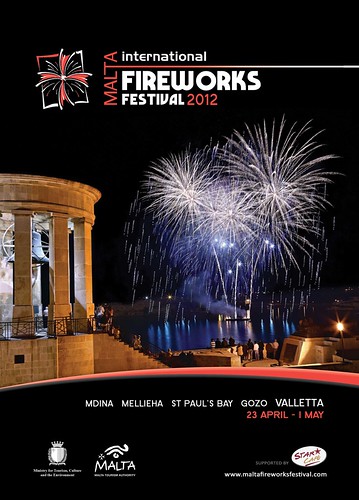 Floriana - An eight minute long firework display synchronised to music will be held by FireOne Malta in collaboration with St. Nicholas Fireworks Factory of Siggiewi, at the Excelsior Hotel following the welcome reception launching the International Symposium on Fireworks conference being held in Malta.

St. Paul’s Bay / Bugibba Promenade – Nine different Maltese fireworks factories participate with a variety of Maltese ground based fireworks that relate to the chronological development of this form of pyrotechnic display from traditional Catherine wheels to mechanised pieces.

21.30 Pyro musical display by Phoenix Fireworks of the UK

21.30 Final Grand pyro-musical display by Parente Fireworks of Italy. Please note that this is a non competitive fireworks display.

WHAT: Flamborough Fire FestivalWHY: New Year CelebrationsWHERE: The Festival Arena is situated at Mereside, Flamborou...
Read More
Filed in: Malta International Fireworks Festival 2012
Share:
Find us on Facebook Find us on Twitter Find us on Pinterest Find us on Instagram Find us on Tumblr Find us on Vimeo Find us on Youtube Find us on LinkedIn Find us on Flickr
Previous article BACKPACK MOUNTED FIREWORKS DISPLAY