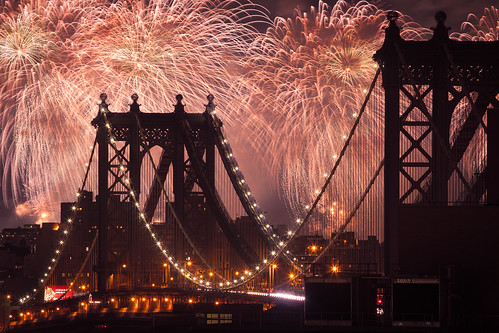 The 2011 35th annual Macy's fireworks show is one of the world’s largest and most spectacular firework displays. This year more than 40,000 shells exploding at a rate of around 1,500 per minute and fireworks reaching heights of 1,000 feet in the air.

We got a little giddy on hearing this and immediately requested time off and an expense account to view the exhibition (on the grounds of research and international relations). We are still eagerly awaiting an answer but we are not holding our breath due to the shaking of heads and muffled laughter in the Epic HQ main office, a petition for next years visit is under way.

The show starts at approximately 9:20 pm on July 4th, although we would suggest you aim to be in position by 5.00pm and have lots of supplies, remember things like spare camera batteries, blankets, refreshments, chairs etc. Hotdog vendors and such like we expect will be out in force, also a portable TV may be useful as the whole show (minus the atmosphere) will be shown on NBC. The music will be performed in sync with the fireworks and can be heard on 1010WINS so take a portable radio and witness the show as it should be, timed to perfection.

The display lasts for around 25 minutes and will be set off from 6 barges (not barrages) located between 24th and 50th Streets on the Hudson River. This year, the number of shells has been increased, providing greater prominence for millions of spectators.
The characteristic Macy's "Golden Mile" fireworks effect, featuring a shower of golden sparks stretching a mile across the river, will be heightened this year with added mile-long showers of sparkling red and green.

This year’s theme for the fireworks spectacular is the "Gift of Freedom” celebrating the 125th anniversary year of the Statue of Liberty, as well as the 235th birthday of the United States. And will feature music from stars such as Taio Cruz, Everclear, Jennifer Hudson, Katy Perry ( bet she does “firework” !) and LeAnne Rimes. In addition, Also Broadway stars Anika Noni Rose and Karen Olivo will pay tribute to the "Lady in the Harbor" with a bilingual performance of the original song “Gift of Light”.

12th Avenue and the northbound lanes of the West Side Highway will be closed to vehicles from 2pm onwards from 23rd St to 59th Street and turned into a huge block party for viewing fireworks, expect some traffic chaos and possible delays, our advice “plan ahead”.

We expect that there will be a very limited viewing of the fireworks above 59th St.

As far our informants can gather, Riverside Park will be open and should have reasonable views of the fireworks with fewer crowds.
Battery Park City would normally be an ideal location to watch the fireworks because in past years you would be able to see both the Macy's fireworks and the New Jersey fireworks at Liberty State Park.

But unfortunately, the Liberty State Park Fireworks have been cancelled due to budget cuts. From The Battery, you probably won't be able to see the Macy's Fireworks very well but on a positive note, it will probably not be very crowded there.

Macy’s web site for the show www.macys.com/fireworks seems to be being updated as we speak/type, but I’m sure will have more useful advice shortly, also www.ny.com will be a worthwhile site to visit prior to the festivities for information on road closures and expected delays.

Although long-range weather forecasting is a bit of a hit and miss affair, predictions are expected to be the mid to high 80’s.

Wherever you watch them from, enjoy.

WHAT: THUNDER OVER LOUISVILLE 2023WHY: FIREWORKS AND AIRSHOW EVENTWHEN: SATURDAY 22nd APRIL 2023WHERE: LOUISVILLE, KE...
Read More
Filed in: 2011, 4th july, Independence Day, macy's fireworks
Share:
Find us on Facebook Find us on Twitter Find us on Pinterest Find us on Instagram Find us on Tumblr Find us on Vimeo Find us on Youtube Find us on LinkedIn Find us on Flickr
Previous article SOUTHEND’S FIREWORK DISPLAY IS TO MAKE A COMEBACK THIS YEAR!