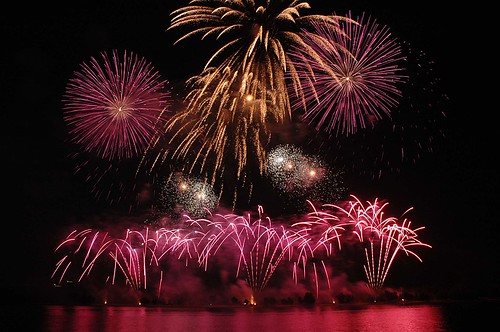 To celebrate Singapore’s independence from Malaysia in 1965, Marina Bay Singapore will host the BIGGEST display yet.

The very first National day parade started at 9am on the 9th of August 1966, and has gradually increased the number of fireworks used over the years, from just 4000 in 2004 to 9000 two years later.

The Prime Minister of Singapore, Lee Hsien Loong, will make a speech around 9am which is named the National Day Rally (akin to our Queen’s Speech or America’s State of the Nation speech) before the festivities start. You can expect Carnivals, Bands, concerts, live entertainment, and of course FIREWORKS on an Epic scale. Each year the celebrations follow a particular theme with its own specially commissioned song. This year the theme is “love at first light” in recognition of the staggering beauty of their Country.

Singaporeans are very proud of their country which is made up of 63 islands and separated from their previous rulers, Malaysia, by the straights of Johor.

Several international pyro display teams will take part at various locations across the country, culminating in the huge National event this year as last the display will centre around the Marina Bay area, home of the fireworks for the next two year when it will move to the new “sports hub” when completed hopefully in 2014.

Organised by the aptly named “unusual productions”, this plans to be the most spectacular yet usually, a budget of over one million Singapore dollars is set aside for the pyro. Being in third place in the world’s most prosperous nations by “per capita”, we expect the budget to increase dramatically since the country has taken to westernisation and now hosts its own round of the F1 calendar between 21st and 23rd of September. This is the only night race of the Formula One season, which is also hosted at the Marina Bay location.

Just to give our readers an idea what to expect, in good old blue peter fashion “here’s one they did earlier”.

If any Singaporeans want to have their own display in the UK, give us a call, we are always here seven days a week and happy to help.

Thanks to constant improvements in firework manufacturing, and a thirst from importers to deliver the most impressive...
Read More
Filed in: Fireworks, Independence Day, National Day Parade, singapore
Share:
Find us on Facebook Find us on Twitter Find us on Pinterest Find us on Instagram Find us on Tumblr Find us on Vimeo Find us on Youtube Find us on LinkedIn Find us on Flickr
Previous article SOUTHEND’S FIREWORK DISPLAY IS TO MAKE A COMEBACK THIS YEAR!