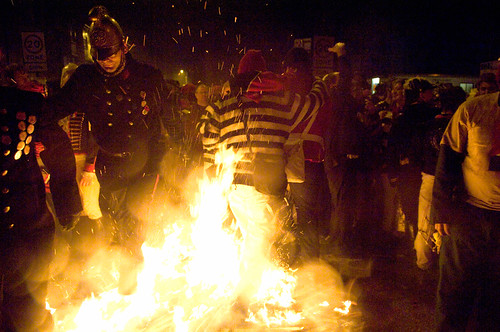 The Lewes Bonfire celebration is the largest event of its kind in the world and held annually on November 5th in the otherwise peaceful county town of Lewes.

The Lewes Bonfire Society has held processions through the Town since the 1800’s when following the dissolution of the earlier Guy Fawkes celebrations by Oliver Crowell 1649 – 1660, they were re-introduced by King Charles II in 1820. The first recorded parade of Guy Fawkes, enemies etc was in November 1679 when the Pope, Guy Fawkes and others were paraded in picture form on long poles by young armed men in Lewes.

However, the Bonfire Boys of yesteryear were a little over-zealous in their celebrations and they generally deteriorated into fighting and riots and once again, the Police had to redress the balance.

By the 1850’s, celebrations were fully re-introduced in a very similar format to those of today and the parades of the Lewes Bonfire Societies were allowed back on the streets. The original societies were Lewes Borough and Cliffe and the others, most of which continue to this day were initiated around the late 19th Century.

In 1901, a memorial was erected on Cliffe Hill by public donation to commemorate the 17 Martyrs burned in Lewes for their religious beliefs. A service of thanksgiving is held annually for the lives lost in the name of religion.

Today, Cliffe Hill (the site of the memorial) is fully floodlit during the Lewes Bonfire celebration parade and the area is treated like a consecrated ground.

Nowadays, 25 to 30 visiting Bonfire Societies from across the County intermingle on the narrow streets of Lewes. Each of the societies begins the event by parading their quarter before joining together for the main ‘street parade’. They carry burning torches, effigies of the famous and sometimes infamous faces from history including The Pope, Colonel Gadaffi, George Bush and whichever ‘Celebrity’ happens to be hitting the headlines at the time.

As a footnote, this is not a family event where you can pop along for a coke and a candy floss. It feels almost like a really fancy political march but the history behind it remains fascinating as the gathered societies have a wonderful, if not a particularly safety-conscious time but when all said and done, these are adults exercising their right to free speech and long may it continue.