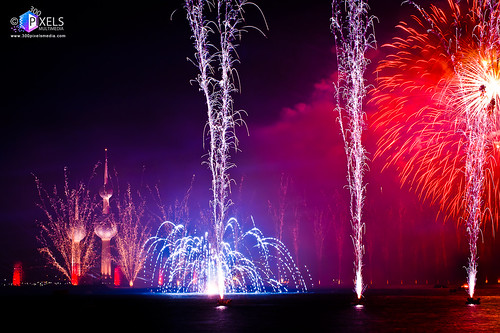 For the paltry sum of just £10million (YES 10 million pounds), Kuwait earned a place in the Guinness Book of Records last night as it celebrated the golden jubilee anniversary of its constitution in style by laying on the biggest fireworks display in the word.

A dazzling array of colours illuminated the skies above the country's capital of Kuwait City as a staggering 77,282 fireworks were launched over the period of an hour.

A representative of Guinness World Records announced the achievement on Kuwait television at the end of the display which had been watched by tens of thousands of Kuwaitis and expatriates on the Arabian Gulf Road by the sea.

The visual presentation marked 50 years to the day since the late emir Sheikh Abdullah al-Salem al-Sabah announced that Kuwait had become the first Arab state in the Gulf to issue a constitution and have a parliament.

Before the festivities, Emir Sheikh Sabah al-Ahmad al-Sabah pledged the government's continuing commitment to democracy and made a plea for national unity as the wealthy Gulf state struggles with a political crisis.

WHAT: Flamborough Fire FestivalWHY: New Year CelebrationsWHERE: The Festival Arena is situated at Mereside, Flamborou...
Read More
Filed in: fireworks display, golden jubilee, Guinness World Record, Kuwait, world record, worlds biggest fireworks show
Share:
Find us on Facebook Find us on Twitter Find us on Pinterest Find us on Instagram Find us on Tumblr Find us on Vimeo Find us on Youtube Find us on LinkedIn Find us on Flickr
Previous article THE HISTORY OF SKY LANTERNS