Thirteen may be considered an unlucky number, but not for the German city of Cologne, as this year it stages its 13th show on the 13th of July.

This all-day event starting around 2pm and mostly free (with some paying options for the best viewing points) culminates in a high impact pyro-musical show which has wowed the world and regularly attracts well over 100,000 spectators.

The inspiration and title of this year spectacular is “Dream Catcher” and we expect the music and atmosphere to reflect an ethereal, almost dream-like performance from the nine pontoon bridges of fireworks stretching across the Rhine. 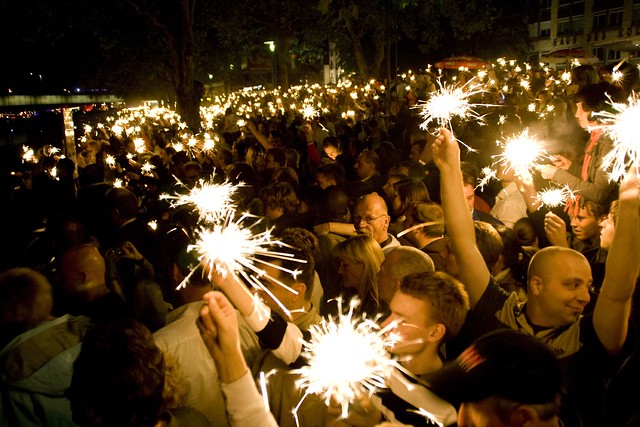 The dancing fountain is another favourite at the event but be warned; stewards will be closing the gates at 21:00 with the nearest viewing area from the main stage area being over the Deutz Bridge a few minutes’ walk away.

We advise making your way to the viewing areas and plan to be settled in by the latest 8pm as demand is high for the better viewing spots, as always it may be worth taking with you spare camera batteries, an umbrella (just in case) and a ground sheet or rug to sit on.

Expect to see the brightly coloured boats which leave from the old town port in a procession down the Rhine before the fireworks kick off at around 11:30, traditionally the watching spectators illuminate both banks of the river with lanterns and sparklers.

The best places to watch are between the Hohnezollera and zoo bridges but we have included a map for your convenience.

Having visited Cologne back in the 80’s, and I'm sure not that much has changed, bier (or beer as we call it) will flow freely and bratwurst, bockwurst, schnitzel and frickadellen will also be in plentiful supply. Further information can be found here.