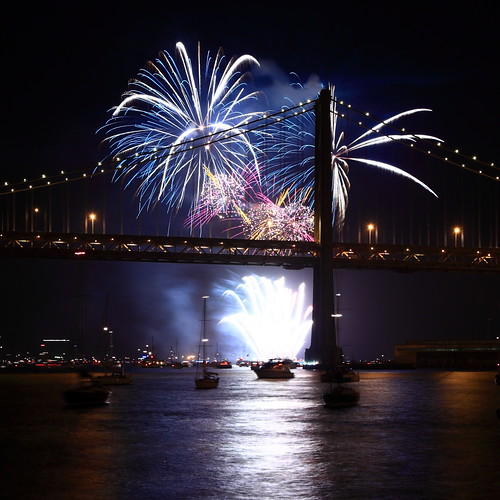 Besides the long lingering question, why do all radio stations in America have 4, seemingly random, letters before the word radio as their name? The big question is how the fireworks will look in their new home?

The KaBoom Fireworks display is moving to Candlestick Park, the famous home of the San Francisco Giants for many years and the spot where the Beatles played their very last commercial concert; a good bit of history there.

KFOG's annual event was forced to move from its previous spot after safety concerns led to structural tests on pier 30 and 32. It was discovered that these piers are no longer strong enough to hold the mass of equipment and vehicles required to put on this multi-million dollar event. Never mind, onwards and upwards.

The event will be synchronised to a soundtrack that has not been confirmed yet but it is expected to be contemporary music mixed with some old family favourites. This is a very family friendly night that attracts about 400,000 people. It is popular to hire boats and take part in boat trips out onto the bay for the very best view of the fireworks.

Tickets are a reasonable $15 a piece which is not bad considering a world-class fireworks display and a fun friendly environment await all. Let us just hope it's not too foggy!!

and here it is, a little bit of the 2010 KFOG KaBoom Fireworks Display video from Candlestick Park.

A hidden gem of a game is available on Steam for PC. If you are a fan of Pyro, and want to put on crazy, funny, intri...
Read More
Filed in: Fireworks, kaboom, KFOG, san francisco
Share:
Find us on Facebook Find us on Twitter Find us on Pinterest Find us on Instagram Find us on Tumblr Find us on Vimeo Find us on Youtube Find us on LinkedIn Find us on Flickr
Previous article TOP 5 HALLOWEEN FIREWORKS