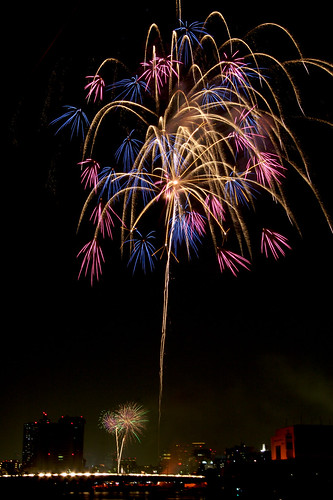 There are three things that indicate it is Summer in Japan:

Every Year, millions gather to watch firework displays along river embankments around the country.

Established in 1733, festivals were begun to help to heal the souls of thousands of people who died during food shortages and a Cholera Epidemics. Nowadays, it is more about getting together with family and friends to celebrate life.

The Sumida River which flows into Tokyo was the venue for the latest of the displays. On Saturday more than 20,000 fireworks were lit and a million were gathered to watch.

Traditional Summer clothing Yukata is worn by many to add seasonal charm. Department stores already note an increase in sales of this traditional garment.

Last Year, the celebrations were very low key following the devastating earthquakes and tsunami but the Japanese are ready to move on, honouring their dead and mourning their losses now with celebration of the lives lost.

The cost of these events is a staggering 150 million yen which is equal to £1.2 million sterling, which is largely funded by tax-payers some municipal government donations as well as private company sponsorship.

This weekend in Tokyo, thanks to the hot weather (42 degrees C which in Yorkshire is hot – in Fahrenheit is 107.6 degrees) money was wisely spent on food and chilled drinks.

Thanks to constant improvements in firework manufacturing, and a thirst from importers to deliver the most impressive...
Read More
Filed in: Fireworks, japan, Tokyo
Share:
Find us on Facebook Find us on Twitter Find us on Pinterest Find us on Instagram Find us on Tumblr Find us on Vimeo Find us on Youtube Find us on LinkedIn Find us on Flickr
Previous article SOUTHEND’S FIREWORK DISPLAY IS TO MAKE A COMEBACK THIS YEAR!