Insensitive MPs plan exclusive New Year fireworks bash at Westminster. But loyal staff will be forced to watch in the cold 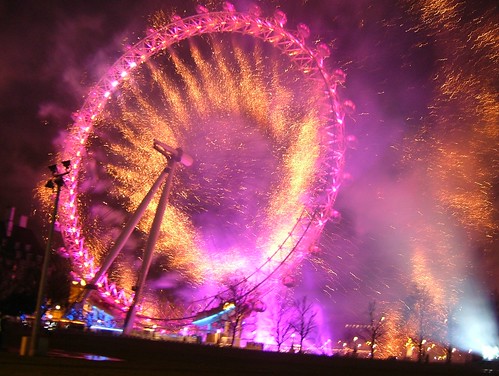 MPs were last night accused of ‘insensitivity’ for throwing a private New Year’s Eve party on the Commons river terrace - so they can watch a spectacular end-of-the decade fireworks show.

After a year of scandals over their expenses, 340 MPs, peers and their guests are paying £10 a head for an exclusive celebration in the shadow of Big Ben.

As thousands of ordinary revellers in Central London stand shivering in the cold to bring in the New Year, MPs will bid farewell to 2009 by gathering in a marquee across the river from the free London Eye fireworks show.

The MPs, peers and some senior bureaucrats will be served by catering staff with canapes and drinks including champagne.

Professional party organisers said the market rate for a ticket to such a unique event would be closer to £100 a head.

The ‘Noughtie MPs’ bash, approved by Commons Speaker John Bercow, has sparked anger among parliamentary officials, secretaries and manual workers, who have been banned from the terrace on New Year’s Eve --one of their few annual perks - to make way for the partying politicians.

‘They’ll be lucky if the whole bill for the evening is under £3,000,’ said one official. ‘After all their antics this year, having a knees-up like this is the height of insensitivity-You’d think they’d be keeping their heads down.’

Mr Bercow says the party will raise money for charity, but one member of the Commons staff said: ‘If they want to give money to charity they can write a cheque out for ten quid any time they like.’

Traditionally, MPs are back in their constituencies by December 31.

Suspicions about an event for them were aroused last week after staff were sent a memo by Serjeantat-Arms Jill Pay banning them from entering the building from 6pm on New Year’s Eve.

The memo said access would be ‘restricted to Members of both Houses, their escorted guests and duty staff only’.

Then invitations were seen that declared: ‘The Pavilion will open from 10pm until

12.30am, providing Members and their guests with an excellent view of the public fireworks display over the Thames whilst they welcome in the New Year.’

A spokesman for Mr Bercow says the event will make a £2,000 profit, after staff costs, for Help A London Child. MPs would get one drink in the ticket price and then pay normal ‘ commercial’ prices for bottled beer, wine and champagne - not the taxpayer-subsidised rates they usually paid.

But Commons insiders disputed the figures.

Mr Bercow’s spokesman last night said the party would raise money for a good cause. Click here for the full story.

The absolute best fireworks in cinema, a countdown:Nothing beats watching a mesmerizing firework display with your ow...
Read More
Filed in: Canadian House of Commons, Central London, Epic Fireworks, Fireworks, John Bercow, london eye, Member of Parliament, new year, New Years Eve, nye
Share:
Find us on Facebook Find us on Twitter Find us on Pinterest Find us on Instagram Find us on Tumblr Find us on Vimeo Find us on Youtube Find us on LinkedIn Find us on Flickr
Previous article TOP 5 HALLOWEEN FIREWORKS