The 36th Macy’s 4th of July Fireworks Spectacular is now less than a month away and already is proving to be a little controversial, splitting a city in two.

Macy’s choice of venue has angered the residents of Brooklyn, Queens, and the east side of Manhattan, to a stage where some residents have refused to shop in Macy’s Department Store again.

Back in 2009 Macy’s, decided to celebrate Henry Hudson’s journey into New York by staging the annual display on the Hudson River rather than the usual East river, it was at the time said to be a temporary move, but four years later there have been no plans to move the event back.

East New Yorkers are asking, is this decision based on economic reasons? as local waterfront bars and restaurants benefiting financially in the more affluent areas of the west side.

We don’t know the political reasons for the move but it does seem from the reactions and feedback from last year’s display that it was a great success and west-siders have welcomed the decision with open arms.

Macy’s this year held a Facebook campaign for an unknown artist to sing the star spangled banner live at the event. After much deliberation, the final winner is Kory Glattman, who will perform what has been described as a special and powerful rendition of the American anthem live on NBC and watched by millions.

Americans were also asked to submit votes for their favourite inspirational music to accompany the pyrotechnics. The final choices are:

Over 40,000 fireworks will be lit in the 25-minute spectacular overseen by megastars Katy Perry Famous for “Firework” and Kenny Chesney, one of the USA’s biggest country stars.

Local lad Craig Ward from Lincolnshire has been offered the mammoth task of photographing the festivities. Craig, now a veteran of huge campaigns, having in the past being commissioned to work for wired, talk-talk, and the New York Times, will use a variety of photographic techniques to capture the atmosphere, from long exposure shots to L.E.D arrays, and some of unique camera trickery.

The display will be fired from barges anchored between 18th and 43rd St.

Spectators have been asked to travel to the event by public transport where possible, leaving their cars at home, with this in mind NYC transit have put on increased services to cope with the expected masses both before and after the display. Here's more information below :) 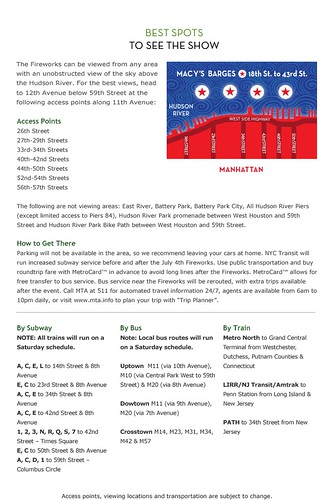 WHAT: THUNDER OVER LOUISVILLE 2023WHY: FIREWORKS AND AIRSHOW EVENTWHEN: SATURDAY 22nd APRIL 2023WHERE: LOUISVILLE, KE...
Read More
Filed in: 2012, 4th july, best place to view the fireworks, Hudson River, Independence Day, Macy, macy's fireworks
Share:
Find us on Facebook Find us on Twitter Find us on Pinterest Find us on Instagram Find us on Tumblr Find us on Vimeo Find us on Youtube Find us on LinkedIn Find us on Flickr
Previous article SOUTHEND’S FIREWORK DISPLAY IS TO MAKE A COMEBACK THIS YEAR!