How To Photograph Fireworks 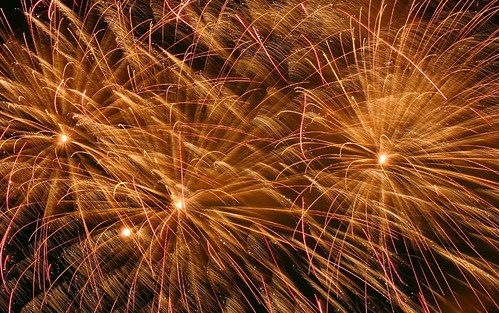 Its heading to that time again, its Bonfire Night and the kids are raring to go, you have got them to the venue and now you want to capture their faces on film …. This is where it generally goes awry.

We understand the challenges of trying to take a photograph in what is often poor light, night-time and the fireworks are moving but once you are aware of the basic principles, it is really quite easy.

Before we go telling everyone how to do it, remember that irrespective of the equipment being used, you should still be able to take some really good snaps. Fireworks have the benefit of being really bright so even with a cheap and cheerful camera, some good images should be possible. Since the sensors on compact cameras and camera phones don't tend to be as large as on the average DSLR, motion blur can be a significant issue. Take extra care to hold your camera as still and steady as possible. If your camera phone can capture video, that might be an even better option, especially for the grand finale!

As well as camera phones, there are a number of point and shoot cameras on the market which will also include a special fireworks shooting mode – this generally has an icon which looks like a bunch of fireworks – however, if your does not, this is not the end of the world. Please remember that night mode is not the same as firework mode.

• Situate yourself above ground level – generally some distance away.

• Check wind speed and direction, you don’t want to be stood in the pathway of the smoke.

• Consider including scenery in your pictures, both to offer a sense of scale and to keep your compositions interesting.

• Spectators can be a great way to capture the excitement of a fireworks display and gives you the opportunity to play around with techniques such as silhouetting. You could also consider including buildings, monuments, and similar structures as an addition to the fireworks themselves.

• As with most low-light photography, you will get the best results if you use a tri-pod.

• Turn off flash and auto focus – set it to manual focus and infinity.

• The beauty of fireworks isn't just in the explosion itself, but in the trails of light that blossom out and slowly fade away as they fall. You'll have to use relatively slow shutter speeds to capture the whole show.

Whatever your plans are for this Bonfire Night, don't forget to bring your camera! From a huge national fireworks extravaganza to your own backyard barbecue's, a little planning and a little luck will reward you with beautiful photographs. Just remember to follow your firework code and be safe!