Hot Off The Press. EPIC Does It Again. 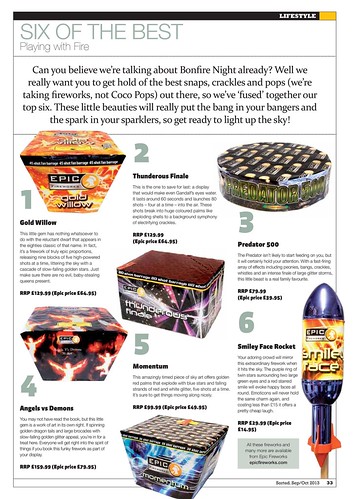 Epic fireworks are no strangers to the popular press had previously been the subject of a number of pieces in Men’s Health, The Sunday Mail supplement and Front Magazine and this year, we are delighted to be featured in the Sorted Magazine September/October edition.

They took six of our finest examples of 1.3g pyro available in the UK today and let rip!!

The first featured is the majestic Gold Willow which belts out 5 shots at a time leaving the ground in a fanned set up leaving bright tails behind and once they reach max height each of the comets burst into huge red-gold willow with white tips. A single effect piece that is brilliant in the middle of any display and used by pro firers up and down the UK for weddings and private displays. This is excellent value for money at just £64.95 including VAT (RRP £129.99).

Then, we have the brilliant and unparalleled Thunderous Finale. As the name would suggest, this absolute belter of a firework is a finale cake which took the fireworks world by storm when it first arrived in the UK in 2006. It is loud, its brash and its gorgeous and no display would be complete without one (or as many as you like – well spaced they are brilliantly fired in multiples). Available in both the original version and the 2012 Thunderous Finale II this must have firework has its own fans from John-O-Groats to Lands End.

The Predator is next up and its 500 shots of varied effects lasting for over two and a half minutes it is excellent value for money and perfectly created for a mid display filler. Since going to press (back in early May) the Chinese have increased the cost of this massively so we will have to wait until they arrive to give an update on cost but it is a fabulous piece even at the full RRP of £79.99.

Angels Vs Demons is a pyro nut favourite as it is packed with power and is fast firing mayhem in a box. WOW is generally the expression used when you see the spinning dragon tails and listen to the super loud reports (like gunshots only louder!) and large brocades with slow-falling glitter. Stunning!

Momentum is a lesser acknowledged beauty. This is one of the Epic staff favourites as its red/gold palms are really beautiful and although slow-paced, it fills the sky above with light and huge effects.

Finally, the ever popular 1.3g Smiley Face Rocket. What can you say about it other than on a still clear night sending one of these high into the sky it breaks into a HUGE smiley face which is guaranteed to bring a smile to all your spectators, young and old.

This is of course just a small fraction of our MASSIVE collection of pyro. If you click on the link below, you can browse our full range of SIB’s (single ignition barrages) for yourself.

Since the discovery by a monk in China almost a thousand years ago fireworks continue to thrill and astonish young an...
Read More

Looking for the perfect gift for your pyro mad friend or partner?Well look no further as Christian Dior have added th...
Read More
Filed in: "sorted mag", award winning fireworks, Best Fireworks, Epic Fireworks, epicfireworks, six of the best fireworks, Sorted Magazine
Share:
Find us on Facebook Find us on Twitter Find us on Pinterest Find us on Instagram Find us on Tumblr Find us on Vimeo Find us on Youtube Find us on LinkedIn Find us on Flickr
Previous article CAI GUO-QIANG VR FIREWORK ARTWORK