Apologies, but this event is cancelled due to the COVID-19 virus.

Observed annually on the last Monday in May, Memorial Day or the Floating Lantern Day began in America as a holiday that originated in the years following the Civil War in the latter part of the 19th century. It held in remembrance to honour the fallen and became an official federal holiday in 1971. 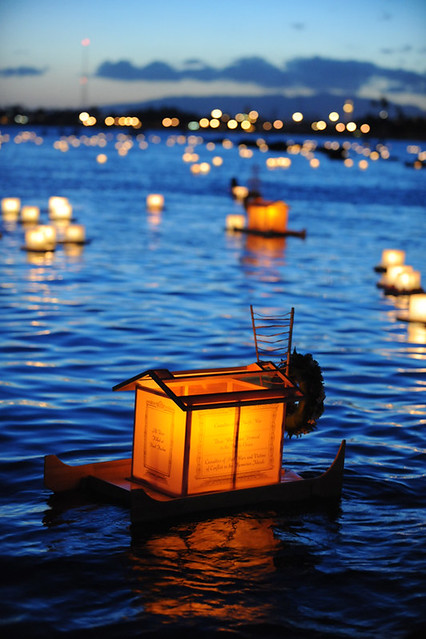 Hawaii took part in the remembrance each year by placing flowers and offerings on the gravesites of those who served their country, but also for other loved ones, friends, and family that had passed away too.

Known for its diverse population and culture, the Hawaiians adopted the remembrance but decided to do it in a different way. The first was held on Memorial Day 1999 when her holiness Shinso Ito, the head priest of Shinnyo, officiated the ceremony and was the first shinnyo-en lantern festival to be held outside of Japan. For the next three years, it was held at Ke’ehi Lagoon on the South shore of Oahu, until 2002, when the ceremony moved a few miles down the coast to Ala Moana Beach where it has remained and been observed ever since. Now held annually on Oahu’s south shore the annual floating lantern festival attracts over 50,000 locals and visitors to the beach to give a personal memory, reflect and give gratitude to them that have already left the planet. 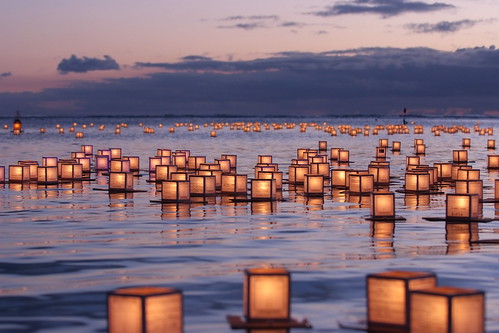 If you are not lucky enough to attend the event, then you can also join the thousands of watchers all around the globe via the streaming a telecasting that’s available. If you happen to be in Hawaii and not be able to get to Ala Moana Beach Park, then you can still write down your remembrances and affirmations at a local Shinnyo-en temple or training centre. Submitting it online or through the lantern floating Hawaii website.

There is a special schedule to the day that is followed each year:

Shinnyo Taiko – This is a call to begin the celebration and this is from a large concha shell. This is a signal for everyone to join and offered as a prayer for peace with the hope that people reach out in the spirit of creating harmony to support one another.

Oli – A Hawaiian chant that calls the attention of all present to prepare their hearts to receive the importance of what is to come.

Hula – This is a visual of a song (mele) or chant (oli) through dance. Hawaiian language scholar Puakea Nogelmeier wrote “Ka lei moana” the encircling garland of the sea which has been shared at the ceremony every year.

The entrance of the main lanterns – This is where the six large lanterns that carry prayers for all spirits on behalf of all the people. These are offered to all victims of war, water-related incidents natural and manmade disasters, famine and disease. It is gratitude to all along with endangered and extinct plant and animal life. They are setting sail to encourage harmony and peace to all and everything in the world.

Light of Harmony – Community leaders from various sectors all come together in the spirit of friendship along with demonstrating their unified commitment to creating harmony amid diversity.

Blessing and transformation – Her holiness Shinso Ito blesses the ceremonial area along with the lanterns, and everyone participating in the ceremony local and from afar. This is prior to the floating of the lanterns.

An offering of food and water – This is to nourish the souls of those been remembered.

Strewing of the flower petals – Since ancient times the paths of loved ones have been covered in flower petals, the offering symbolises love and respect.

Shomyo – A chant that is a fusion of Buddhist and western choral harmony.

The ringing of the bell – The crystal clear sounds of the bell focus everyone’s thoughts and prayers and it rang by her holiness. It signifies that the floating of the lanterns is about to begin.

Floating of the lanterns – This is done at dusk and the lanterns are placed on the water with wishes of peace and happiness of loved one’s past while unveiling courage and hope in the hearts of those in the present.

There are different types of lanterns at the floating parade to be seen and it is a sight to behold as the water glows from the 7000 plus lanterns that are placed on them. This is a magical display of light and love and with the setting sun providing a magnificent backdrop something that you won’t want to miss.

The opening ceremony of the Winter Olympic Games has finally begun in Beijing, China.A beautiful firework display com...
Read More
Filed in: FLOATING LANTERN FESTIVAL, HAWAII, HONOLULU, Lanterns
Share:
Find us on Facebook Find us on Twitter Find us on Pinterest Find us on Instagram Find us on Tumblr Find us on Vimeo Find us on Youtube Find us on LinkedIn Find us on Flickr
Previous article EPIC VERSUS THE GLOBAL SHIPPING CRISIS