WHAT: HARBIN ICE AND SNOW FESTIVAL 2020
WHY: ICE AND SNOW SCULPTURE FESTIVAL (FEATURING FIREWORKS)
WHEN: 5TH JANUARY (RUNS FOR 1 MONTH PLUS – DEPENDING ON WEATHER
COST: £22.00 APPROXIMATELY (200 YUAN)

The incredibly pretty Harbin Snow and Ice Festival started back in the late nineteen sixties but didn’t get fully established until 1985 and has successfully run annually since.

It is a gargantuan task to organise. A team of around 10,000 workers cut blocks of ice from the frozen Songhua River every year to create the magical ice world. They are referred to as farmers as they cut, hoist and collect the ice needed for the sculpted perfections created once they are on site.

Every year, teams of men go along to carve the ice for the Harbin Festival and due to the arduous nature of the job, the fact that the working conditions are out in -20 degree temperatures and frankly, it is hard graft, many say that they will not be returning but, come the harvest time, they return year on year. The team cut around 4 million cubic feet of ice and it takes around 15 days to build this frozen kingdom.

The residents of Harbin (its nickname is Ice City) number around 5 million so the huge influx of visitors swells the numbers to around double each week, bringing much-needed funds to the local economy. Living in one of the coldest places on earth, life is hard in Harbin during the winter months but in the Summer, it is as pleasant as anywhere else in Northern China. 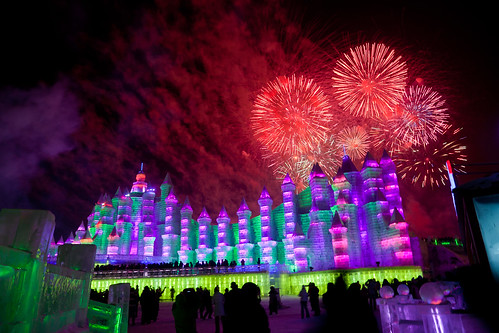 The site covers an area the size of Hyde Park in London with towering ice palaces and incredibly detailed sculptures it is the biggest event of its size in the World.

As well as the artistic excellence of the very gifted sculptors, there are loads of winter sports events on offer:

It is ultimately a competition so the ice and snow sculptures will be judged but some of the detail is outstanding.

Like any other city, it has the usual smattering of retail outlets and souvenir goods stores. The biggest saleable items are Russian themed for the most part:

The fireworks take place almost nightly so if your travels take you to far-flung places, why not check out somewhere unique.

Announcements that Christmas may be as close as possible to normal following on from the news that there is an effect...
Read More

Bonfire night is fast approaching and for most of us we will be holding our own COVID safe family affair at home. As ...
Read More