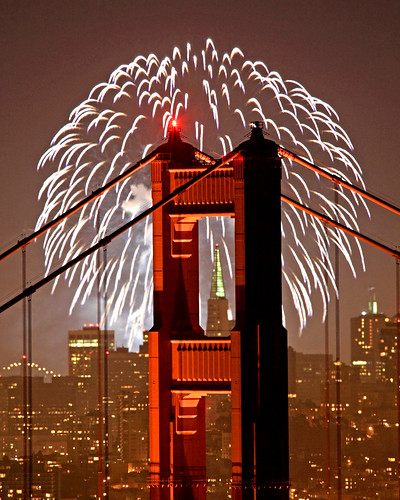 WHAT: A HUGE FIREWORK DISPLAY TO CELEBRATE THE 75TH ANNIVERSARY OF THE GOLDEN GATE BRIDGE
WHERE: BEST VIEWS WILL BE AT THE FORT POINT TO THE MARINA GREEN OR THE MARIN HEADLANDS
WHEN: 27TH MAY 2012 - CLICK HERE FOR THE FIREWORK VIDEO :)

May the 27th 2012 is the 75th anniversary of the golden gate bridge, and to celebrate 500,000 people will witness a massive fireworks display of epic proportions.

The fireworks display starts at 2130 with a procession of cars from 1937 to present day, a nostalgic watercraft parade, and media presentations celebrating this engineering feat, unfortunately, the fireworks won't be televised :(

Here some interesting facts about the Golden Gate bridge:

It took just over 4 years to build the bridge.

Before the construction of the bridge, the only way to cross was by boat. Enterprising boat owners formed the Sausalito land ferry company in 1867 charging $1 for the 27-minute journey across the San Francisco Bay.

Previous estimates for the construction had been around the $100 million dollar mark, which was considered a lot of money back then. The huge costs were paid for by bonds issued before its commission was finally paid off in 1971.

Earlier sceptics said a span of 4200 feet, using 129000 miles of steel cable, couldn’t be done as the strain on the supports would be too much to take when wind was added to the equation as gusts of over 60 miles an hour had been recorded, also the swirling currents would undermine the foundations, so plans for a 55 mile road and rail bridge across the Bering straight were considered but cost was far too high for a country reeling from depression.

Using a new deflection theory, where the thin road surface would bend with the bridge was passed, Senior engineer Charles Alton Ellis in collaboration with Leon Moisseiff, broke ground on the 5th January 1933 with a budget of 35 million dollars, and came in $1.3 million under budget.

All credit to the designers, who managed to construct a bridge that in 75 years has only been, closed three times when wind speeds rose above 68 miles an hour.

The name “Golden Gate” was first mentioned in 1917, when the colour which is a variation of vermillion called international orange, was selected as it blends into the local landscape and makes the structure more visible in the frequent fog.

The Golden Gate Bridge is the most photographed bridge in the world and has appeared in more films than any other to date.

WHAT: La Merce Festival 2023WHY: Celebration of Barcelona’s patron saintWHEN: 21st – 26th September 2023WHERE: Barcel...
Read More
Filed in: 75th anniversary, birthday fireworks, fireworks display, Golden Gate Bridge, Happy Birthday
Share:
Find us on Facebook Find us on Twitter Find us on Pinterest Find us on Instagram Find us on Tumblr Find us on Vimeo Find us on Youtube Find us on LinkedIn Find us on Flickr
Previous article SOUTHEND’S FIREWORK DISPLAY IS TO MAKE A COMEBACK THIS YEAR!