The event was first launched in 2000 and is now one of the most significant festivals held in Korea. The idea behind the first festival was with the aim of wishing for peace and harmony and now years later over 1.2 million locals and tourists flock to Yeouido Hangang to be part of the thrilling experience of activities on offer as well as the beautiful fireworks.

Various events and performances will be held through the day and the night and this year’s theme is “Life is Colourful”.

In keeping with the theme, there will be the art exhibition of “Bulggot Atelier” this will run 1st -5th October and is an art space for all with more than 10 world-renowned artists. 63 building will be putting on a colourful led performance along with daytime fireworks, food and beverage vans and a flea market. 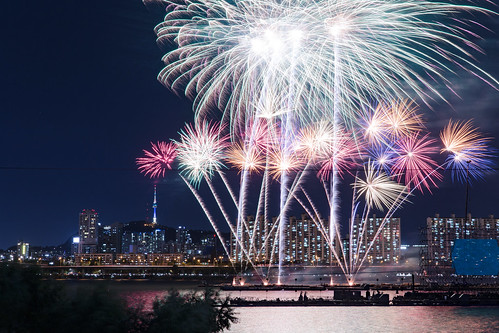 The highlight and the finale of the event takes place on the 5th October when the skies come alight with the fireworks displays. Held in the scenic Yeouido Hangang Park, fireworks are staged by three companies from Korea, Sweden, and China. Hanwa Cooperation is the main host for the event and will sketch across the night sky making it light and bright as over 100,000 blasts of vivid fireworks on top of the Han Ricer explode in sync with the multimedia led show of 63 building.

Programme for the fireworks

Act 2 – Memory of stars – single ignition fireworks such as mines and comets are used to display fireworks on Wonhyo bridge to look like stars cascading down rhythmically from the sky.

Act 3 – A heart full of light – varied forms of life are expressed with rainbow colours with various emotions such as love and sorrow. As the fireworks burst, they reflect on the nearby 63 building creating a more fabulous view.

Sweden – Team Goteborgs – Theme: Colour Of The North – Known as Europe’s leading team and is the 1st invitation that they have had to Korea. The company was formed in 1994 by former competitors and since then they have been growing year on year. Now they have collected 24 gold medals and several other awards making them a well-known company in Scandinavian Competitions. They competed in Montreal a couple of years ago and lifted the Silver Jupiter award so they are definitely a force to be reckoned with.

China – Team Sunny – Theme: The Starry Night – Sunny have taken part in Seoul many times before and were last here in the 2012 edition of the event. They were first established in 1988 and partnered with 2 main firework factories in China and are now one of the largest pyrotechnic manufacturers in China.

With all teams working together on their display we can guarantee that this will be a fun evening with lots of spectacular pyrotechnics on offer.