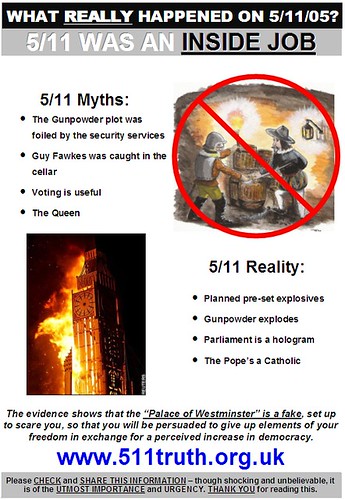 Bit of a joke poster for the 5th November gunpowder plot. Was it an inside job? Quite possibly, it has been suggested by a few conspiracy theorists that the whole plot was an inside job by the government to convince King James that the Catholics could not be trusted. Seems like a strange stunt but consider the following points:

Robert Cecil, the Earl of Salisbury and James’ right-hand man hated Catholics and saw them as real troublemakers. Cecil was worried that King James would go softly on them during his reign and this irked him, to say the least. Cecil wanted Catholicism out of England altogether, the steps that King James were taken to expel priests was not enough for him.

It is well known (amongst those who know) that James was very scared of meeting a violent end. Growing up in Scotland his life had been full of dangers; he was even kidnapped as a young boy. Cecil knew this and it’s possible he thought that by getting James to believe they had tried to blow him up would turn him against them for good.

36 barrels of gunpowder is a lot of powder. In those days the government tightly controlled all the gunpowder in Britain, so how did Guy Fawkes and co. get a hold of that much? Did they have a contact inside parliament?

Why would a bunch of Catholics be allowed to rent a house so close to the Houses of Parliament or a cellar right underneath it? Seems a bit unlikely in those troubled times.

Why search the parliament cellars on that night, for the first time in British history? What would inspire such a search? Convenient, almost too convenient.

Why did the soldier who shot Robert Catesby and Thomas Percy at the shootout at Holbeach House receive such a large pension (allegedly 10p a day for life) as a reward? Surely these men would have been better taken alive so they could squeal on their co-conspirators.

All intriguing and thought-provoking arguments, however, just like any good conspiracy, there are counter-arguments just as powerful. We will attack them in reverse order. Just to be different.

The soldier had bravely fought and risked life and limb for his King and country, of course, he was due to a good pension. Although 10p a day seems a bit meagre by today’s standards it was a lot back then.

The cellars were most likely searched because of Lord Monteagle's letter. “What’s that?” I hear you say. I’m glad you asked.
During the preparation, several of the conspirators had been concerned about fellow Catholics who would be present on the appointed day and inevitably killed. One conspirator, Francis Tresham - who had been introduced to the plot as he was a wealthy Catholic, and could provide money and weapons – is suspected of writing the anonymous letter of warning to Lord Monteagle, a prominent Catholic and Tresham’s own Brother-in-law. Monteagle received the letter on Friday, October 26, at his house in Hoxton:

My lord out of the love I bear to some of youre frends I have a care of your preseruasion therefore I would advise you as you tender your life to devise some excuse to shift of your attendance at this parliament for god and man hath concurred to punish the wickedness of this time and think not slightly of this advertisement but retire youre self into youre control where you may expect the event in saftey for though there be no appearance of any stir yet I say they shall receive a terrible blow this parliament and yet they shall not see who hurts them this councel is not to be condemned because it may do you good and can do you no harm for the danger is passed as soon as you have burnt the letter and I hope god will give you the grace to make good use of it to whose holy protection I commend you.

Monteagle had the note read aloud, possibly in an attempt to warn the plotters the secret was out and promptly handed it over to Robert Cecil who was the 1st Earl of Salisbury and the Secretary of State. The other conspirators learned of the letter the following day but resolved to go ahead with their plan after Fawkes inspected the undercroft and found that nothing had been touched.

So, it seems from this that it was this letter from the traitor to the plot, Francis Tresham, that in the end tipped off big Cecil and foiled the plan.

The plotters would all have been using fake names and concealed their true identities, indeed we know that Guy Fawkes was under the assumed alias “John Johnson” which is the lazy and quickly thought up the fake name a young miscreant might give when inadvertently having his collar felt by the rozzers today.

Furthermore, Thomas Percy had contacts in the parliament and these were almost certainly used in obtaining the rented property for their devious scheme.

36 barrels of gunpowder is a lot of powder, but come on, anything can be obtained if you know the right people and have the hard cash. Guy Fawkes knew a lot of military types from his days in the Spanish army so this would have been a very easy obstacle for them.

So if it was a big conspiracy, why did Fawkes not crack under torture and spill the beans? He was famously tough to interrogate (like Mel Gibson in Lethal Weapon) in fact the only one who cracked and talked was Thomas Winter and he made no mention of a double conspiracy. They all knew they would be executed one way or the other so why not snitch at this point as there was nothing left to lose.

The other little-unanswered question here is Francis Tresham.

He was the man who wrote the letter to Lord Monteagle and also the one man who was not killed or hanged with the others. He was locked in the Tower of London and allegedly died from taking poison on the 23rd December 1605. Where did he get the poison from? Did someone want him silenced? Was he poisoned at all or did he abscond in secret out of the country for his part in helping the government?

It is almost certain the big Cecil was at it somehow although exactly how we will never know; in fact, all of these questions perhaps will never be answered. One thing that is for sure that the arguments over the conspiracy will rage on and continue to keep us entertained for many years to come.

For more information on the history of the Gunpowder Plot and the events that led up to it visit the Epic Fireworks Learning Centre.

Scheduled to be the 22nd running of the FIFA World Cup competition and for the first time in the events history, taki...
Read More
Filed in: Conspiracy, Gunpowder Plot, Guy Fawkes Day, history
Share:
Find us on Facebook Find us on Twitter Find us on Pinterest Find us on Instagram Find us on Tumblr Find us on Vimeo Find us on Youtube Find us on LinkedIn Find us on Flickr
Previous article INSTANTLY LIGHTING OVER 10 KILOS OF EPIC FIREWORKS