It'll be a green event, but Sydneysiders celebrating New Year's Eve around the harbour this year have been asked to wear something blue for the occasion.
The City of Sydney announced plans for the city's New Year's Eve event, a carbon neutral display of fireworks and entertainment with the theme "Awaken the Spirit". 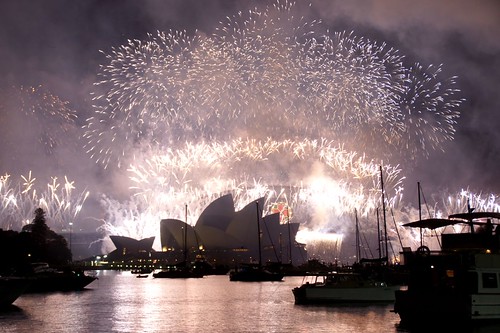 In keeping with the theme, Sydney New Year's Eve creative director Rhoda Roberts has asked everyone who attends one of the 40 vantage points to wear a touch of blue, she said captured the spirit of Sydney.

Organisers were coy about the exact design that will adorn the bridge this year but promised it would be the most technologically sophisticated display ever.
Microchip technology will be used for the first time to create bigger and more precise designs in the sky.

Lord Mayor Clover Moore asked people to behave in accordance with the green principles of the event - which is partnered with the Australian Conservation FoundationThe event will cost $5 million, with funds coming from both the City of Sydney and its sponsors.

Qatar is the first middle eastern country to host the world cup, which was opened in spectacular style with a knock-y...
Read More
Filed in: Fireworks, new year, Pyrotechnics, Sydney Harbour Bridge
Share:
Find us on Facebook Find us on Twitter Find us on Pinterest Find us on Instagram Find us on Tumblr Find us on Vimeo Find us on Youtube Find us on LinkedIn Find us on Flickr
Previous article TOP 5 HALLOWEEN FIREWORKS