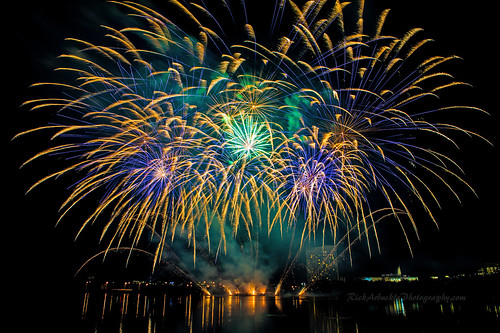 The organisers of the biggest, most colourful and spectacular event of the summer get under-way, the Casino du Lac-Leamy Sound of Lights, also known as the Sound of Light show. This year's event introduces four new teams from 3 different countries all competing for the best reactions to some aerial displays which are set to light up the skies over Gatineau.

Featuring tracks as contrasting as Nat King Cole and Faithless, and the Gorillaz and The Royal Philharmonic Orchestra this team might have its work cut out.

The Danish entry includes some beautiful and haunting tracks from the beautiful voice of Alexandra Burke's Halleluja and Sarah Brightman and Cirque du Soleil.

I love this choice of music - action film soundtracks!! The show from the Philippines includes tracks from James Bond, Mission Impossible and Back to Brooklyn.

The UK entry is bound to do us proud and the music is to take us off on a World tour. The soundtrack to this display includes music from The Red Hot Chilli Peppers with the fantastic Celtic Bolero to doing it Gangnam Style for Asia. Wonderful music so we sincerely hope that Pains are going to do it bang-bang style!

The Grand Finale of Casino Lac Leamy will be offered up by Royal Fireworks to the theme Legends of Fire. Again featuring film soundtracks they have choreographed a spectacular display to blockbuster soundtracks from Avatar, The Golden Compass and the brilliant Sherlock Holmes.

I for one cannot wait to see the video footage of this show and if you are fortunate enough to be there on holiday or business and happen to take some shots, let us have them to feature on our website.