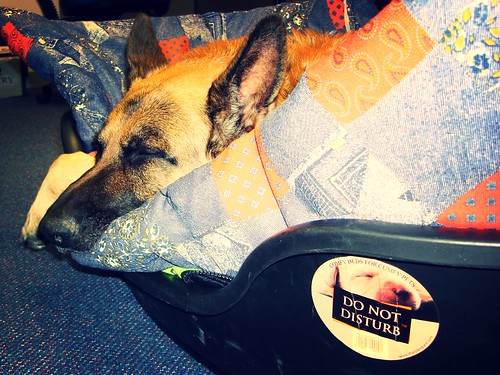 Here at Jimmy's, anyone who has been fortunate enough to visit us in the showroom will have met the beautiful Bruce. A German Shepherd dog who was our friend, protector and credit control for many years. It is therefore with great sadness that we announce that the old boy passed away peacefully in his sleep last weekend, surrounded by his toys and cuddled up in his blanket. He was to some just a pet but to us, he will be greatly missed.

As anyone who has had a pet they have lost will appreciate having had Bruce for over 12 years, he was almost a member of the family and staff. We all have our own memories of him we would like to share with you.

As anyone who has been in will personally attest to, on first entering the showroom, he was the first to announce anyone's arrival with gusto!! He would stand guard at the end of the counter which looked to many too short to keep him in but for all the noise, what many would not appreciate is the difficulty he had experienced in getting up off the floor in the first place. He was bi-lingual and could hear a sandwich box open even in the deepest sleep. His day started with a cup of tea and whatever toast he could beg as well as his cod liver oil and glucosamine sulphate tablets (which he could always find and leave in the bowl irrespective of how well hidden they were!!). He watched over all of us and gave out loving snot rubs daily on Julie and whoever he could get close to. When in need of a cuddle, he would let you do whatever you wanted and could act like no other. He once stood in front of Julie shivering until she gave him her pink jumper which he accepted with grace until Paul said I was ruining his street rep!!

He knew when it was lunchtime as often Paul and Jimmy would be eating boiled eggs whilst he tucked into organic chicken and rice. He had his favourite treats with pig ears or smacko's been his first choice. He would go to the drawer and tap it with his paw until he got his own way! He tolerated having antlers on at Christmas and even posed for photo's when asked.

Bruce will be sorely missed and we would like to ask that anyone who has personal memories of our beautiful old boy to let us share them.