A lovely painting by George Babier entitled: Fireworks in Venice for Fetes Galantes 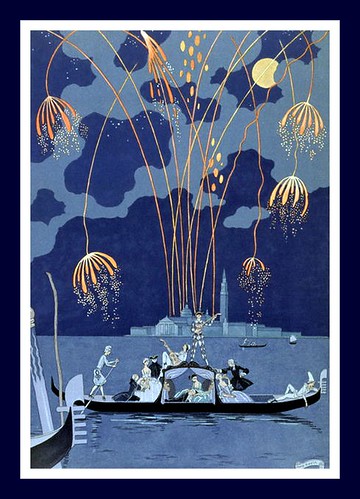 It is often said that artist George Barbier’s extravagant theatre costumes gave flamboyance an entirely new meaning. Flamboyance is shown well in this painting where Barbier (1882 – 1932) portrays a gondola scene with opulence aplenty and the Venetian aristocracy enjoying themselves to the fullest with splendid fireworks going off overhead.

Barbier, is famed for his inspirational design and artwork and flourished in the Art Neaveau period... well, we don't know a right lot about art, but we know what we like, and we like this. 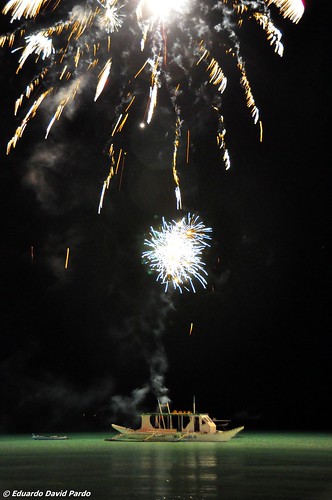 Now to get back to real life, here is a lovely and peaceful scene of a boat on the water with fireworks going off above having been launched from the boat. Such boats are often used for fireworks displays in major cities all across the world. Usually referred to as barges, some of the best fireworks displays on the planet use them to make the magic happen, some notable displays are the London New Years Eve display and the Macy's 4th of July display in New York. Being set off from the river gives the fireworks space they need to perform and the safety distances required.

If you are concerned about loud bangs and prefer quieter fireworks, then check out our top five low noise picks!5. Si...
Read More
Filed in: Fireworks, George Barbier, venice
Share:
Find us on Facebook Find us on Twitter Find us on Pinterest Find us on Instagram Find us on Tumblr Find us on Vimeo Find us on Youtube Find us on LinkedIn Find us on Flickr
Previous article A HISTORY OF FIRECRACKERS AND WHY THEY ARE RED