Freedom Over Texas with Fireworks - 4th of July Heaven

The largest land-based fireworks display in the United States of America! Only in Houston, Texas.

Freedom Over Texas with Fireworks is one of the most spectacular and patriotic fireworks displays in the country. Set to music, the bombs will be bursting rhythmically in the air and the rockets red glare will light the sky above Houston's Eleanor Tinsley Park, 500 Allen Parkway Houston, TX 77002. At the Buffalo Bayou. The music will be a collection of some of America’s favourite tunes, from patriotic songs to rock ‘n’ roll hits to classic anthems.

The fireworks start at 9:30 p.m. sharp after a 4th of July concert saluting the military heroes of Houston and honouring the 40th anniversary of NASA’s Apollo XI Lunar Landing.

Mayor Bill White said, "I want to invite our fellow Texans to Houston's All - American Fourth of July celebration, This year we salute Houston's Heroes. This includes the men and women serving our armed forces today and in years past. It also includes NASA's iconic space program on the 40th Anniversary of the historic Apollo XI Lunar Landing. Thanks to our Anchor Sponsors, the city is able to bring in an unbeatable headliner and a host of other entertainment. For the fourth year in a row, Shell is on board to underwrite a spectacular fireworks show, making Houston the number one-Fourth of July destination in the country." 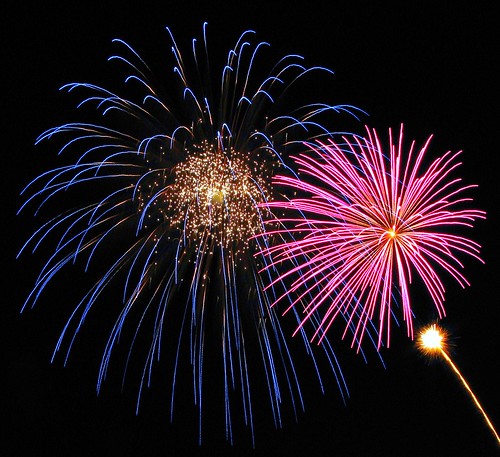 Dick Williams, President of Shell WindEnergy Inc. says, "For more than 80 years, Shell has been a strong supporter of the Houston community and our nation. As a country, we have much to celebrate, and we at Shell are thrilled to participate in the festivities this year."

This Saturday Country singing sensation, Clay Walker, will ignite the stage and a concert will precede the main event, the Independence Day fireworks presented (presumably meaning funded) by Shell Oil Company and choreographed by the world-renowned fireworks artists from Pyro spectacular "North by Souza".

Both the concert and the fireworks will be televised live on KTRK-TV (ABC), Ch.13.

The fun starts for "Freedom Over Texas with Fireworks Presented by Shell" at 4 p.m. on Saturday, July 4. Americas Birthday.

Through the daytime, three stages will keep everyone dancing with music running the gauntlet between country, rock 'n' roll, and Latin, pop and oldies.

Party-goers will have the opportunity to see up close the Shell-sponsored NASCAR, Kevin Harvick’s car and the Tire Change Challenge, this should be great fun for the dads.

And there is plenty for the family to do, with face painting, free rides, games, jugglers and more in the Fiesta All American Kids Zone.

With Shell providing the capital for much of the event, you may find the Gexa Energy booths, where you will have the opportunity to take advantage of special offers on 100% wind-powered, 100% pollution-free electricity plans, learn more about renewable energy solutions, and discover actions they can take to pay less for electricity.

The Budweiser Beer Garden will offer a place to relax with a cold one and enjoy the Fourth of July atmosphere, with a selection of Craft and Import Beers and a prime view of the fourth annual Bud Light Texas Volleyball Championship!

"Freedom Over Texas with Fireworks Presented by Shell", or "Freedom over Texas" for short, will be simulcast on KTRK-TV (ABC), Ch.13 from 7 p.m. until 10 p.m. on Saturday, July 4. In addition, Clear Channel radio station, Classic Rock 93.7, The Arrow/KKRW-FM will simulcast the music medley specially choreographed for the fireworks spectacular.

Admission for the event is FREE. And, new this year, Freedom Over Texas with Fireworks Presented by Shell is going green, providing recycling receptacles and encouraging all patrons to recycle and keep America beautiful.

WHAT: Planet CoasterWHY: A fantastic theme park and firework simulator.WHEN: Out now.WHERE: Most gaming platforms.COS...
Read More
Filed in: Fireworks, Independence Day, July Fourth, Shell Oil Company, Texas, United States
Share:
Find us on Facebook Find us on Twitter Find us on Pinterest Find us on Instagram Find us on Tumblr Find us on Vimeo Find us on Youtube Find us on LinkedIn Find us on Flickr
Previous article AUTUMN LIGHTS RETURNS!