There isn't much in this world today that is free so we take it by the horns and give it a shake when you find something so we are bringing you the latest on fireworks displays around the UK to bridge the gap till Bonfire Night.

Anyone who is either from Sussex or has a connection to the fireworks industry will affirm that the biggest celebrations for Bonfire Night take place in Sussex amongst the Bonfire Society faithful annually. They plan many months in advance for their unique and some might say dangerous event but this is a little stop-gap beforehand. 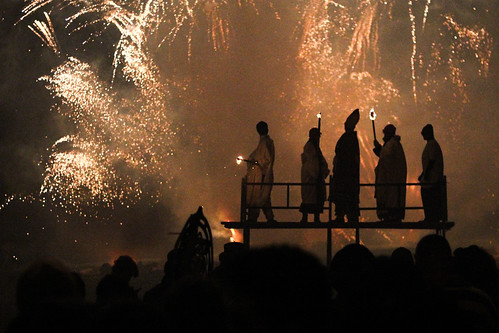 Way back in history the battle of Lewes was one of the two main battles which took place in 1264. It was the point at which King Henry III’s son, Prince Edward, was held hostage, forcing the King to accept the demands of the Baron’s that held him.

This year, they are holding a HUGE fireworks display to mark the 750th anniversary of the Battle. The venue is the Dripping Pan, home of Lewes FC and the event was only possible thanks to the support of the players and staff of the football club and the funding of the local Town Council. The football team even turned their annual gala dinner into a huge medieval banquet in the Town Hall to raise funds and reflect on the 750th anniversary of the battle.

The events continue throughout the weekend when a re-enactment of the battle will take place at the Dripping Pan when they will hold costumed processions through the town, a youth camp, a medieval Fayre and talks, exhibitions and lots and lots of music. On the Sunday, the venue will remain open to enable visitors to the area to chat with the participants in the battle in full medieval costume plus any number of other demonstrations.

The fireworks are being fired by the pyro team from the Commercial Square Bonfire Society members and promises to be absolutely brilliant.

We will bring you some snaps of the event as soon as they hit the airwaves!

Whilst browsing the web I came across a video titled 'rare fireworks' - so I had to give it a go and see if I learned...
Read More
Filed in: Dripping Pan, firework, firework display, free fireworks, Free Fireworks Display, Lewes, Sussex, Sussex Bonfire Societies
Share:
Find us on Facebook Find us on Twitter Find us on Pinterest Find us on Instagram Find us on Tumblr Find us on Vimeo Find us on Youtube Find us on LinkedIn Find us on Flickr
Previous article EPIC VERSUS THE GLOBAL SHIPPING CRISIS