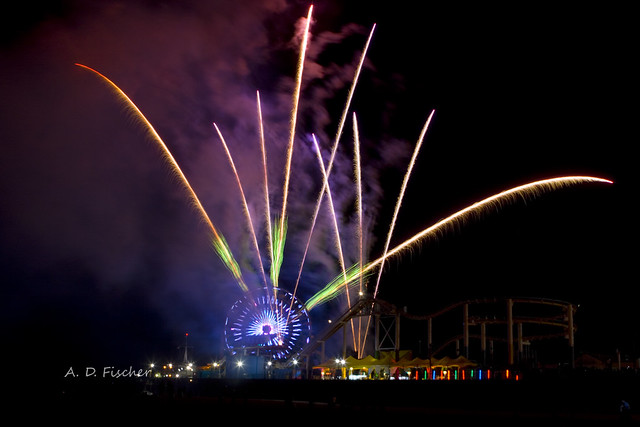 Celebrate the 100th birthday of a Southern California landmark: the Santa Monica Pier.

The Sept. 9 centennial party will include a day of activities that culminate in the pier’s first large-scale fireworks spectacular in 18 years.

The pier, a magnet for tourists, has appeared in a bevvy of movies, including “Funny Girl,” “They Shoot Horses, Don’t They?” “The Sting” and “Forrest Gump.”

Built in 1909, the pier draws millions of visitors each year, but its future was in jeopardy in the 1970s, when Santa Monica proposed tearing it down.

A grass-roots campaign to “Save Our Pier Forever” grew from a few members of the fishing community to the entire community and helped save the structure.

“The pier today remains an icon, a single remnant of history on a coast that was once peppered with piers,” said Ben Franz-Knight, director of the pier’s Restoration Corporation.

“It offers nostalgia for yesteryear,” he said but remains “a vibrant entertainment centre. It deserves the birthday celebration of a century.”

Among centennial activities will be a grand re-opening ceremony at 6 p.m. that will feature a group of centenarians who will cut a 100-foot birthday cake. The fireworks show is tentatively planned for 8:45 p.m.

There also will be beach activities and a charity auction benefitting Special Olympics Southern California that includes dinner and a private VIP viewing area of the centennial fireworks show.