Reports say that it was a spectacular sight to see as the skies over Abu Dhabi were lit up last night in celebration of the 42nd National Day.

The City was alight with merriment for the whole of the two days of celebrations culminating in massive fireworks spectacular.

Throughout the day, Military Jets were entertaining the city's residents with some daring aerobatics showing the Abu Dhabi colours in the sky above.

There was any number of special dance events and none more so that the one which took placed on the breakwater area where dozens of men held aloft imitation rifles over their left shoulders whilst wielding massive blades in their other hand as they danced and chanted to the beat of the drums to show their solidarity. The dance itself was originally a post-war victory dance with its roots in Yemen but it was then brought to the UAE via the Royal Family in the Southern Emirates. 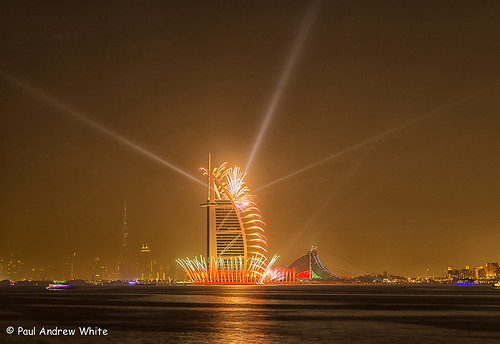 The entertainment was of course nothing short of brilliant but when darkness fell, the skies were awash with the colours of the Abu Dhabi via a spectacular laser show emitted from the palace and traffic was at crawling pace as drivers paraded their highly decorated cars. They were all gathered to attempt a World Record for the most decorated cars in one location at the same time with a financial incentive for the best-decorated ones - 1st prize 100,000 (£16,129) and 2nd prize 25,000 (£4,032).

Sadly, they only had 171 cars at the start and needed to have 250 minimum to stand a chance of beating the record.

A total of 63,410 fireworks in total and the event is being put fired by Spanish fireworks specialist Angel Gonzalez from Pirotecnia Igual, who have been responsible for some of the most inventive celebration fireworks in the World. They fired over two nights at 9:00pm on the 1st and 2nd December and as you can see below, they were absolutely beautiful, especially when lit by the laser lights.

Mine cakes are a harder to find, seldom seen, firework which unlike traditional mines are made up of multiple tubes a...
Read More
Filed in: abu dhabi, firework video, Fireworks, fireworks display, Middle East, National Day. Abu Dhabi, United Arab Emirate
Share:
Find us on Facebook Find us on Twitter Find us on Pinterest Find us on Instagram Find us on Tumblr Find us on Vimeo Find us on Youtube Find us on LinkedIn Find us on Flickr
Previous article AUTUMN LIGHTS RETURNS!