Fireworks. History in the UK. 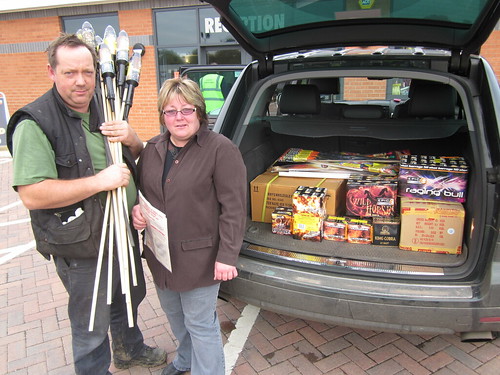 The history of fireworks, or more specifically the invention of gun powder is widely thought to have been created by accident following the accidental mixture of a three common kitchen ingredients KN03 (salt petre) sulphur and charcoal. They were heated over a fire and dried to give a black flaky powder which burned with a loud bang when ignited. This crude and early mixture was referred to back then as fire chemical and became the modern day gun powder.

It was inevitable that the world would eventually notice that this now powerful explosive could be used in warfare. The Chinese were well aware of the explosive power that they had created and within a century had applied this to the development of fire arrows (bamboo firecrackers secured to an arrow and shot at the enemy) and ground rats. These were rats which were inserted into bamboo and fired at the enemy scaring the horses.

Before long the knowledge had crossed the widest oceans. It is believed that the explorer Marco Polo on one of his many trips to China transported this invention to the middle east where the crusaders brought it to England.

Richard Bacon, an English Scholar was one of the first Europeans to study gunpowder and write about it. He wrote ‘if you light it you will get thunder and lightning if you know the trick..’ and he was the one thought to have concluded that it was the salt petre that was the driving force behind the explosion and as he realised that this knowledge had the potential to completely revolutionise warfare and thereafter wrote his notes referring to this in coded form.

It was in 1560 that European chemists managed to establish the ratio of the ingredients in order to make the powder as powerful as possible. The ratios were salt petre 75% charcoal 15% and sulphur 10%. These ratios are still used to this day, almost 500 years later.

The invention of fireworks effectively brought about the end of medieval warfare causing it to come to a close as metal armour could now be punctured by bullets and once seemingly impenetrable walls of castles could be blown to bits by cannon balls.

However the field of pyrotechnics is far from fulfilled. There are problems that have been stumbled across that are yet to be solved (for example the production of forest green coloured fireworks) and certain areas of the field have not yet even been touched upon or explored.

The field of pyrotechnics has both an exciting history and future and its development continues to this day.

Would you like to know more? Then pop into our custom built showroom in South Yorkshire and we will be happy to assist you.

Organised as a free event by the Mayor of London, this festival which takes place in Trafalgar Square is sure to be a...
Read More
Filed in: Fireworks, History in the UK
Share:
Find us on Facebook Find us on Twitter Find us on Pinterest Find us on Instagram Find us on Tumblr Find us on Vimeo Find us on Youtube Find us on LinkedIn Find us on Flickr
Previous article THE HISTORY OF SKY LANTERNS