Firework Names. Where do They Come From. 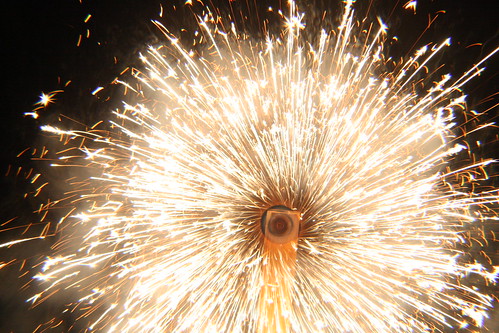 Why do we call fireworks by their names? The British have a wonderful tradition of calling fireworks all sorts of names, I'll take you through a few of them.

Catherine Wheel - Apparently named after St Catherine, who was executed by being tied to a wheel, and "broken" on it with hammers. Nasty - and it sounds so idyllic, too! Click here to learn more.

Roman Candle - Oh, another rather gruesome one. Apparently, the Roman Emperor Nero used to set people on fire, and use them as "candles" at the arena. Whilst this is almost certainly a myth, it is curious - and in fact, not really accurate. A burning person doesn't tend to set fireballs off up into the air!

Squib - Old English slang for a failure, or a weak person - made very famous recently by Rowling in the Harry Potter series - but pre-dates her as a firework that fails to go off, often because it is damp!

Pen-Lid cakes - An internet era name for effects - that resemble plastic pen lids being fired into the air! Click here to see some pen-lid cakes in action.

Best of all - albeit a long-banned item, it's the "Jumpin Jack", named after the mythical (and perhaps very real) "Spring Heeled Jack" who terrorized London for a while, with his remarkable athletic ability!

WHAT: Flamborough Fire FestivalWHY: New Year CelebrationsWHERE: The Festival Arena is situated at Mereside, Flamborou...
Read More
Filed in: firework, firework names
Share:
Find us on Facebook Find us on Twitter Find us on Pinterest Find us on Instagram Find us on Tumblr Find us on Vimeo Find us on Youtube Find us on LinkedIn Find us on Flickr
Previous article TAMWORTH FIREWORK DISPLAY BACK WITH A BANG